Please ensure Javascript is enabled for purposes of website accessibility
Log In Help Join The Motley Fool
Free Article Join Over 1 Million Premium Members And Get More In-Depth Stock Guidance and Research
By Travis Hoium - May 26, 2016 at 1:40PM

Is a Detroit stalwart a better buy for investors than upstart Tesla Motors? There may be a better argument than you think.

Tesla Motors (TSLA 1.98%) has taken the world by storm with its push into high-powered electric vehicles and has built a $31 billion business in the process. Nearly 400,000 pre-orders for the Model 3 make the company's standing in the industry undeniable.

But Ford (F 2.79%) is no slouch when it comes to making vehicles, and dwarfs Tesla Motors' production capability. Which one should investors be buying today?

The market has no love for Ford

If you look at the chart below, you can see that Ford has a strong business that's growing and is highly profitable. Yet, the company is valued at just 6.2 times Ford's trailing earnings, an incredibly low multiple usually left for companies in financial distress or with operational problems. 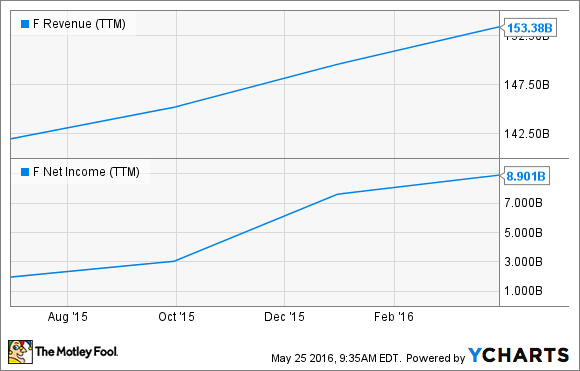 This low multiple could be because of Ford's, and the auto industry's more broadly, trouble during the last recession. It could be an acknowledgement that the company is having to adapt to new threats like Tesla Motors. Or it could just be that investors don't like auto stocks.

But there are a few reasons, I think, Ford is better positioned for the future than most people think. The first is that it's already a world-class manufacturer, something Tesla Motors has yet to prove itself to be. It's also a leader in fuel efficiency and has a growing fleet of hybrids and short-range electric vehicles. But it's also making very long-term investments that could pay off.

Ford is working on its own self-driving technology, including testing LiDAR technology for night driving. It also has longer-range electric vehicles on the horizon, with CEO Mark Fields saying EVs and hybrids will be 40% of the showroom by 2020. But unlike Tesla Motors, Ford is usually tight lipped about new technology until it's closer to release to the public.

The big advantage for Ford in this comparison is that it's an established automaker with the option to add needed technology. And after the turmoil it went through during the last recession, I think Ford is more willing to make those changes than it has been before.

Tesla Motors is all hype, for now

Assessing or valuing Tesla Motors by traditional metrics is difficult because the market is looking at it based on the projected value of products it hasn't even proven it can make. The idea of building a Gigafactory or selling 500,000 vehicles a year is great, but actually doing it is another thing. For argument's sake, we can assume Tesla Motors will succeed at its audacious plans, and we can do some of our own projections based on Elon Musk's current goals.

Below, I've projected revenue based on 500,000 vehicle sales at an average price of $45,000. Gross margin is 20%, lower than Elon Musk's 25% goal, but still among the leaders in the auto industry. For operating and interest expenses I've simply annualized first-quarter (2016) costs, which probably underestimates both, but we'll give the company the benefit of the doubt.

Calculation by the author.

Note that I haven't included any revenue from Tesla Energy. We simply don't know how valuable that business will be -- although it will be much smaller than the auto business -- so for now I've left it out of this projection. If we then take this net income projection times Ford's price-to-earnings ratio of 6.2, we get a market cap of $10.9 billion. But that's far from what Tesla Motors is worth today.

Based on a $220 stock price and the share count after the recent offering, Tesla Motors is worth $30.9 billion, or 17.7 times the projected earnings above.

Tesla Motors is priced for perfection

The biggest difference between Ford and Tesla Motors is the known and the unknown. Ford is a known commodity that's making billions in profits making some of the most popular vehicles in the world. Tesla Motors has built an incredible brand with a massive following and high potential, but hasn't proven it can live up to its hype, especially as a manufacturing company.

And that's where I give Ford the edge between these two stocks. Tesla Motors has incredible potential to upset the auto industry, but it hasn't proven to be a great manufacturer -- and that's what the mass market will demand. Until Tesla Motors proves it can actually make 500,000 vehicles a year and sell them, I'll remain skeptical.

Ford has the advantage as an investment today, and as icing on the cake, I get shares of Ford at a huge discount, even to Tesla Motors' projected value. That's the kind of safety I like to see.