2015 was a big year for music streaming services. Apple (NASDAQ:AAPL) launched Apple Music. Jay-Z relaunched Tidal with a cast of musical artists. Pandora (NYSE:P) continued to stream billions of hours of music to its listeners. And YouTube, a subsidiary of Google -- an Alphabet (NASDAQ:GOOGL) (NASDAQ:GOOG) company -- launched a paid music-streaming service of its own to complement one of its biggest uses.

But the biggest music streaming service in the world -- with 89 million active listeners as of the end of last year -- just released its annual report filings with regulators in Luxembourg. There's a lot of interesting information in Spotify's report that sheds some light on the state of music streaming.  Here, I've collected the most interesting takeaways from Spotify's annual report. 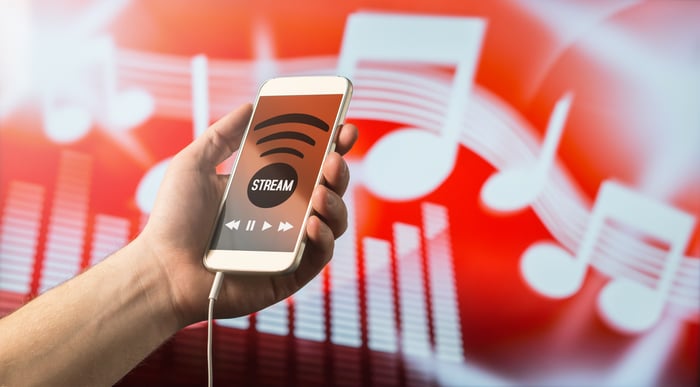 Spotify is taking an even bigger share of the market

Despite the influx of competition last year from big names like Apple and Tidal, Spotify managed to accelerate its revenue growth in 2015. Revenue grew 80% to reach 1.95 billion euros for the year. That's up from 45% growth in 2014, when it recorded 1.08 billion euros in revenue.

Apple recently claimed it had 13 million subscribers for Apple Music (which is paid only), but it's unclear how many of those were using their free trial. Additionally, Apple Music's launch in the middle of 2015 likely kept it from making as big of a dent in 2015 revenue numbers. Apple Music's growth may be coming from subscription declines at smaller competitors like Deezer and the shuttering of others like Rdio, of which Pandora bought the assets.

It's still really hard to make a profit in music streaming

While revenue growth was tremendous for Spotify in 2015, it actually saw its net loss widen 6.3% to 173.1 million euros. Its biggest cost was the amount it paid in royalties. Spotify says that it pays out about 70% of revenue as music royalties, but in 2015 it had to pay 1.63 billion Euros, 83.6% of revenue. In fact, that number has been above 80% in each of the last three years. What's more, that percentage continues to increase. The additional royalty fees are the result of upfront fees and guaranteed minimums paid to record labels.

Pandora and YouTube have successfully lowered the cost of streaming music for free. Pandora, which only supports a radio listening experience, is able to pay a set royalty rate per song play set by the copyright royalty board. That rate was just $0.14 per thousand song plays last year, but climbed to $0.17 this year. Overall, Pandora paid just 52% of revenue as royalties.

YouTube, meanwhile, is able to pay "about a sixth of what Spotify and Apple pay artists," according to Motley Crue co-founder Nikki Sixx. YouTube benefits from existing performance agreements with music labels to use songs for video plays even though it often functions as a music service for many users.

Still, Spotify's results show how difficult it is to make a profit with music streaming. Even with 30 million paid subscribers and 70 million ad-supported listeners, Spotify still can't turn a profit. Its operating expenses are showing good leverage, but it's still moving in the wrong direction net-profit wise. Apple or Pandora investors hoping that music streaming will become a profitable venture in the near future still have a long way to go.