Please ensure Javascript is enabled for purposes of website accessibility
Log In Help Join The Motley Fool
Free Article Join Over 1 Million Premium Members And Get More In-Depth Stock Guidance and Research
By Sam Mattera - May 30, 2016 at 11:05AM

Sluggish demand for services, regulatory scrutiny, and inability to hit guidance could send the stock lower.

2016 hasn't been a great year for Square (SQ 3.97%) investors. Year-to-date, shares of the payments processor have fallen almost 24%, badly underperforming the broader market. Most of that loss has been fueled by the company's recent earnings report. Although Square's business is growing rapidly, doubts remain about the company's long-term potential.

Investors have many reasons to be optimistic, but should also be prepared for Square shares to head even lower. Here are three catalysts that could send the stock tumbling. 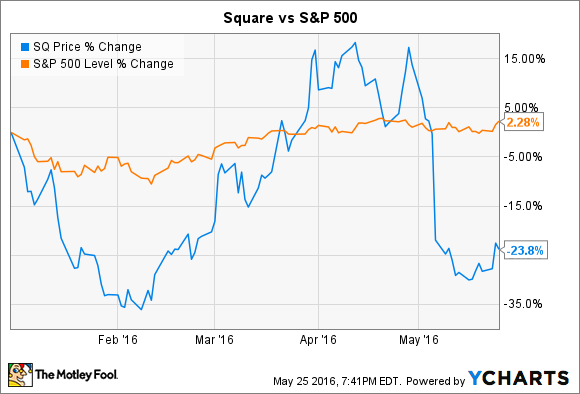 1. Software and data product revenue growth slows
Square derives the bulk of its revenue from its payment processing. Merchants, mostly small businesses, rely on Square's readers to accept credit card payments from their customers. Square, in turn, takes a cut -- 2.92% last quarter. Square's total net revenue amounted to $379 million in the first quarter, $300 million of which came from processing transactions.

Square's transaction revenue is important, and it should grow as the company's business expands and it attracts a greater number of merchant partners. But in the long-run, other portions of Square's business could create more value for its shareholders. In particular, Square's ancillary services, most notably Square Capital, could emerge as the key driver of the company's business.

Square includes Square Capital in its software and data product revenue segment, alongside its other small business services, including Caviar, Employee Management, Customer Engagement, and Instant Deposit. All of these services are designed to aid small businesses in their day-to-day operations -- Square Capital, for example, provides loans. Caviar provides takeout delivery for restaurants, and Square Customer Engagement offers loyalty programs and email marketing. Over time, the value that Square's business creates could emerge from an ecosystem of high-margin services Square sells to its merchant partners. Businesses find Square because of its reader, but then choose to make use of Square's other services -- at least in theory.

Yet Square's software and data product revenue segment brought in less than 7% of its total net revenue last quarter, a paltry figure. Admittedly, it's growing rapidly (it rose 197% on an annual basis, and over 9% sequentially) but its potential remains unknown. If the growth from this segment begins to slow, the story surrounding Square's future as a small business ecosystem could be jeopardized, and the stock could tumble.

2. It faces heightened regulatory scrutiny
The most important of these services is Square Capital. It generates the bulk of Square's software and data product revenue, and it seems to hold the most promise. Square isn't a bank, but it has access to a lot of data. Through its reader, it can track the performance of its merchant partners, almost in real-time. By closely tracking the revenue its partners are generating, Square is well-positioned to judge the relative creditworthiness of small businesses that use its products. At the same time, it doesn't cost Square anything to acquire these potential borrowers -- they're already in Square's system.

It sounds promising, but heightened regulatory scrutiny could put a damper on the success of Square Capital. Earlier this month, online lender Lending Club (LC 1.20%) said it was under investigation by the US Department of Justice. The company isn't a direct competitor to Square, but it uses technology and the Internet to match borrowers with investors. Lending Club's problems appear to stem mostly from its management -- now-former CEO Renaud Laplanche resigned earlier this month.

Lending Club's problems, then, don't directly effect Square, but they could catalyze skepticism or additional regulations around new, innovative forms of lending, including Square Capital. That could hurt Square shareholders.