Americans don't always do such a great job of saving money, but when we think about those who have little to no savings, we tend to imagine low-income families struggling to make ends meet. So it's somewhat shocking to learn that nearly 25% of households earning $100,000 to $150,000 a year claim they couldn't come up with $2,000 in a month's time. 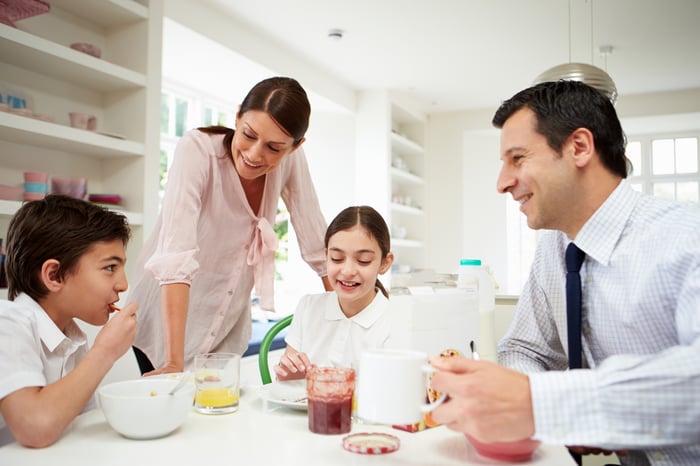 In a study published by The Brookings Institution, participants were asked whether they'd be able to come up with $2,000 within 30 days for an unexpected expense. Across all income levels, over 25% of respondents admitted that they could not come up with that much money, while another 19% claimed they could do so only if they sold off possessions or took out payday loans. In other words, nearly 50% of Americans on the whole are considered, as the study puts it, "financially fragile." And while we might expect lower earners to fall into this category, the fact that so many six-figure families aren't saving means their money management skills just aren't up to par.

A big part of the problem is that higher earners tend to fall into the trap of taking their healthy incomes as an invitation to spend more. Higher earners are more likely to get approved for substantial mortgages and other loans than those who earn less, so many of them make the mistake of spending first and saving second (or not at all). The Brookings study authors admit that while the percentage of cash-strapped six-figure families is perhaps higher than it should be, the numbers are less surprising when we consider the high costs of living in desirable neighborhoods, housing prices, and child care expenses.

While roughly 20% of American households bring home six figures, many higher earners live in the most expensive areas of the country. According to Bankrate, a $100,000-a-year salary in Memphis, Tennessee, buys you the same standard of living as a $245,000-a-year salary in New York City. And even though salaries do tend to be more generous in and near cities with higher costs of living, the folks who make those salaries often have no choice but to spend their earnings in full just to keep up. In other words, our ability to save depends heavily not just on how much we make, but where we live.

In fact, earning more money might actually hinder your savings efforts if you use your higher income as a reason to justify unhealthy spending habits. That's why good savers tend to have one thing in common, and it isn't a six-figure salary; it's a savings mentality. Simply put, if saving money is important to you, you stand a better chance of building up a sizable nest egg than someone whose mind isn't geared toward saving money.

If you're not a natural saver, don't despair, because there are things you can do to change your ways. For starters, force yourself into saving money by signing up for an automatic savings plan. Whether you arrange for a portion of your paycheck to go directly into a savings account or a 401(k), the key is to take the decision out of your hands.

Next, it's time to start living below your means. Take a look at your monthly spending and see where there's room to cut corners. You don't have to dine out at restaurants every week or opt for the priciest cable package. And while you do need a place to live, if your mortgage or rent payment is eating up more than 30% of your take-home pay, it's time to consider moving or downsizing. Additionally, more and more companies are letting employees work remotely, so if you live in an expensive part of the country, it pays to see if telecommuting is an option. If you can retain your high salary but relocate to a less costly area, you'll have an easier time keeping up.

No matter how much money you earn, the key is to make saving a priority at all times. You never know when an emergency might strike, and having some savings is the best way to protect yourself financially.