Please ensure Javascript is enabled for purposes of website accessibility
Log In Help Join The Motley Fool
Free Article Join Over 1 Million Premium Members And Get More In-Depth Stock Guidance and Research
By Timothy Green - May 31, 2016 at 9:00AM

Some billionaire investors are buying the memory-chip stock, and some are selling. Which side is right?

There's no clear consensus among billionaire investors regarding memory-chip manufacturer Micron (MU -2.95%). The Motley Fool keeps track of what major investors are buying and selling, and during the first quarter, there was quite a bit of both. Four funds bought a total of 11 million shares of Micron during the quarter, while eight funds dumped 5.8 million shares.

While it's useful for investors to follow which stocks billionaires own, blindly mimicking these well-known investors is not recommended. Investors should always make their own decisions, and use news of billionaire stock moves only to generate ideas worth exploring further. With the biggest investors split on Micron, should ordinary investors buy the stock?

Important things to know about Micron

Micron manufacturers memory chips. During the company's second fiscal quarter, DRAM generated 54% of total revenue, NAND generated 37%, and other products accounted for the balance. DRAM, or dynamic random-access memory, acts as the main memory in PCs and mobile devices. DRAM is fast, but volatile, which means that data is lost when power is removed.

NAND, a type of flash memory, is used for data storage. USB drives, solid-state drives, and memory cards all contain NAND chips. NAND is much slower than DRAM, but it retains data when the device is powered down.

Both DRAM and NAND chips are commodities, meaning that there is little differentiation between Micron's products and those of its competitors. Supply and demand largely dictate prices in both markets, which leaves Micron susceptible to major swings in revenue and profit. Here's how Micron's quarterly operating margin has evolved over the past seven years: 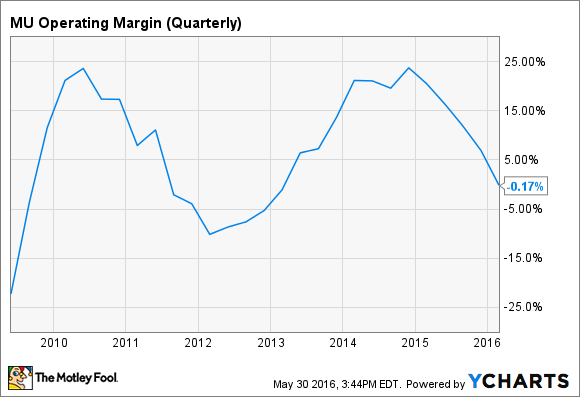 During times when demand outpaces supply, Micron can produce exceptional profits. Fiscal 2010, 2014, and 2015 were all very-profitable years for Micron, with the company managing operating margins in excess of 18%. In fiscal 2014, the company produced a net profit of more than $3 billion on $16.4 billion of revenue -- a record for Micron.

These periods of outsize profits don't last long. In fiscal 2012, Micron posted a net loss of more than $1 billion, as supply overtook demand. During the second fiscal quarter of 2016, which ended on March 3, Micron became unprofitable again, posting a GAAP net loss of $97 million. The company's guidance calls for another loss during the third quarter.

The major points of disagreement between Micron bulls and bears are: (1) the timing of the bottoming out of Micron's profitability, and (2) whether or not the industry will be structurally more profitable going forward compared to the past. Billionaires appear split on these questions, and analysts are, as well.

There are now only three major DRAM manufacturers, and the bullish argument for Micron assumes that this consolidation will lead to less-severe price swings in the future. So far, the bull case doesn't seem to be playing out.

Is Micron a buy?

As Micron's profits soared in fiscal 2014, the stock went nuts. Investors apparently forgot that Micron operates in a cyclical commodity industry. Those who bought at the top have suffered major losses. 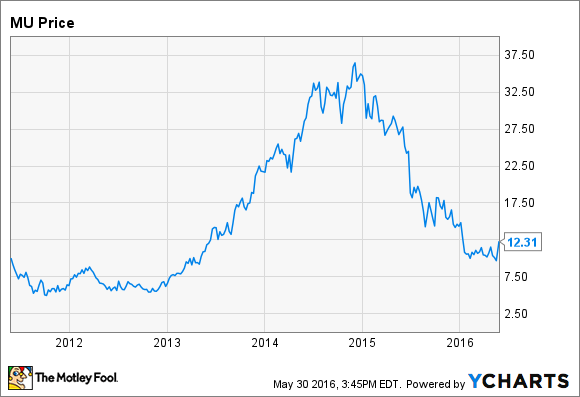 Given the nature of Micron's business, and the wild fluctuations in earnings, valuing the stock based on the book value makes a lot of sense. For much of the past decade, Micron stock has fluctuated around its book value. That changed in 2014: 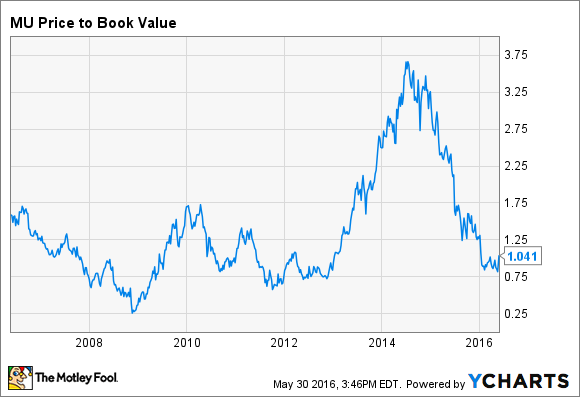 That surge was, I think, irrational exuberance, and it has since been corrected. Currently, the stock trades slightly above book value, a level that I view as roughly fairly valued. I don't think Micron is a particularly great company -- it manufactures commodity products, and it's not a low-cost producer. Micron would need to trade at a considerable discount to book value to pique my interest.

There is one wildcard that's worth mentioning. 3D XPoint, a new type of memory developed by Micron and Intel, has the potential to create a new revenue stream for Micron in the coming years. Micron has high hopes for the technology, but there's no guarantee that 3D XPoint will live up to the hype.

With Micron trading a bit above book value, I don't think the stock is all that attractive. It's possible that Micron's profitability bottoms out in the next couple of quarters, in which case the stock could very well surge.

But it's also possible that this downturn drags on well into 2017. To invest in a company like Micron, I'd want a substantial margin of safety, something the stock doesn't offer at around $12 per share.