Please ensure Javascript is enabled for purposes of website accessibility
Log In Help Join The Motley Fool
Free Article Join Over 1 Million Premium Members And Get More In-Depth Stock Guidance and Research
By Sam Mattera - May 31, 2016 at 6:51PM

T-Mobile (TMUS 0.13%) is attracting both customers and investors. Shares of the telecom giant have risen nearly 9% year-to-date as the nation's third-largest wireless carrier continues to add subscribers at a healthy rate. Hedge fund managers have taken note: D.E. Shaw, Citadel, and Viking Global collectively purchased over 4.3 million shares of the company in the first-quarter.

But not every billionaire is bullish on T-Mobile stock. Paulson & Co and Millennium Management were sellers in the first quarter, unloading about 7 million shares combined.

While blindly following the activity of billionaire hedge fund managers is never a prudent strategy, it's always interesting to track what they're buying and selling. With big money investors split on T-Mobile stock, should others consider buying shares? Or would it be better to stay away?

T-Mobile's business is booming
Last quarter, T-Mobile added 2.2 million customers, of which more than 1 million were postpaid. (Postpaid customers are the most valuable customers in the wireless industry, as they're frequently the most creditworthy and loyal.) Those additional customers have translated into better financials: T-Mobile's revenue and its adjusted EBITDA rose last quarter, up 10.6% and 98.1% on an annual basis, respectively.

T-Mobile's management expects its growth to continue. In April, the company said it would add a total of 3.2 million to 3.6 million postpaid customers in 2016, up from the 2.4 million to 3.4 million range it had previously forecast. Likewise, it raised its adjusted EBITDA outlook from between $9.1 billion and $9.7 billion to a range of $9.7 billion to $10.2 billion.

Still a takeover target?
But T-Mobile is richly valued. Using a standard method of valuation -- the price-to-earnings ratio -- T-Mobile is many times more expensive than its rival Verizon, and it doesn't offer investors anything in the way of income. Telecoms are often favored for their steady dividend payments. Verizon, for example, currently yields around 4.5%. T-Mobile, however, doesn't pay a dividend at all, and it seems unlikely to do so in the near future. 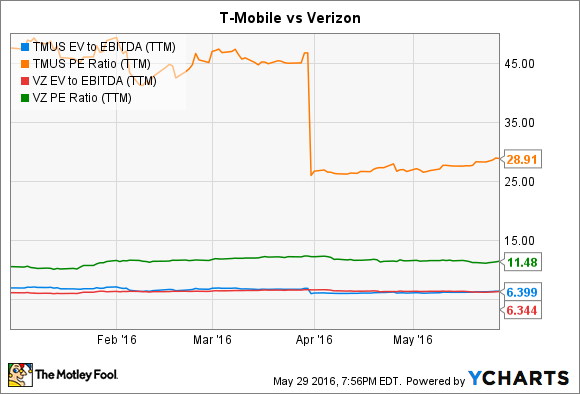 Perhaps more important than its business is the possibility of an acquisition: T-Mobile has long been known as a potential takeover target. This isn't idle speculation -- T-Mobile's parent company, Deutsche Telekom, has made no secret about its desire to see the company sold. While T-Mobile is publicly traded, Deutsche Telekom still owns the vast majority of the company's shares, and has almost total control over its management and board of directors. The possibility that T-Mobile would be sold, and at a healthy premium, may have driven its performance in recent years.

In the past, many potential suitors have emerged for T-Mobile, but to date, no concrete acquisition plans have emerged. The possibility of a sale is further complicated by the current regulatory environment. Rival Sprint was poised to merge with T-Mobile back in 2014, but allegedly backed out after regulators showed signs of disapproval. In March, Reuters reported that Deutsche Telekom had shelved plans to acquire T-Mobile, and would wait for a more favorable political environment, which could come later this year depending on the outcome of the U.S. election.

That may have driven some of the selling in the first quarter. Paulson & Co. employs a variety of strategies, but is well-known for its merger arbitrage. Run by billionaire John Paulson, Paulson & Co. has purchased the shares of many companies that were ultimately acquired, such as DirecTV. T-Mobile remains a key holding of Paulson's (it amounted to just over 4% of his portfolio as of the end of March), but he trimmed his stake last quarter, dumping more than 5 million shares.

An unusual telecom stock
T-Mobile is a well-managed, growing company. It's adding customers each quarter, and they're of an increasingly high quality. But T-Mobile is expensive on a valuation basis, and ultimately, the performance of its core business may not matter -- at least not in the near-term. Its share price may be determined by its acquisition prospects more than its financials, at least for the foreseeable future.

That makes T-Mobile unique among telecom stocks. That additional risk and lack of dividend makes it unsuitable for anyone looking to add a standard telecom stock to their portfolio. However, for some investors, the potential upside may be attractive.