There's a lot about Procter & Gamble (NYSE:PG) that just doesn't change. After all, the company dominates in consumer staple categories like diapers, detergent, and paper towels. That success generates operating consistency that's the driving force behind one of the longest-running dividend payouts in the stock market.

Yet the business is going through a massive shift right now. In response to persistently sluggish growth, P&G has embarked on what executives describe as the biggest transformation in its 175-year history. So it makes sense for investors to understand P&G's core challenge and its two main strategies to try to fix it.

P&G has been struggling to hit that target lately. Organic growth has averaged less than 1% over the last five quarters. Rivals like Kimberly-Clark (NYSE:KMB) and Unilever (NYSE:UL), in contrast, have seen stronger gains in the neighborhood of 4%. In addition, P&G's growth has come mainly from price increases rather than the healthier mix of volume and pricing gains that both Kimberly-Clark and Unilever are seeing.

Much of P&G's underperformance comes from the fact that it is competing in geographic markets that are suffering from currency exchange swings and political and economic instability. However, rivals are also snatching market share, especially on the value side of categories like razors and beauty products.

While P&G waits for market growth rates to pick up again, it is slicing billions of dollars out of its cost structure. Everything from cost of goods to the supply chain to advertising overhead has been a target for cuts. These reductions have resulted in major profitability gains, even though they aren't yet showing up in reported results because currency swings are still pushing overall earnings lower. 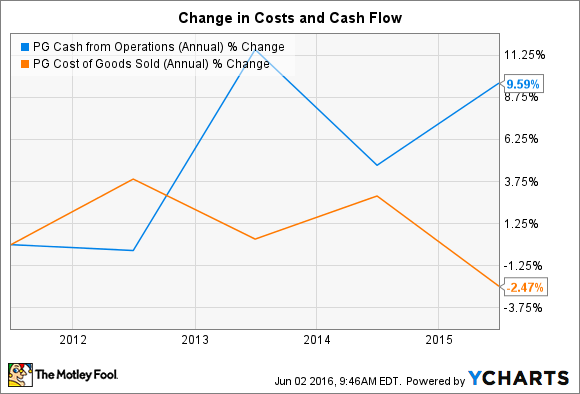 Costs are down and cash generation is up over the last few years. PG cash from operations (annual) data by YCharts.

Investors can see the payoff in cash flow, though, which is near a five-year high. P&G is now routinely converting over 100% of net earnings into free cash, allowing the company to plow investments back into key growth areas like research and development and advertising. Meanwhile, the cuts are helping to fund increasing cash returns to shareholders even as reported earnings stay stubbornly low.

Unilever and Kimberly-Clark are also cutting costs, but P&G is alone in its initiative to drastically trim down its portfolio. Two years ago, management identified 100 brands (including Duracell and Coty) that it felt had relatively low sales and profit growth potential. They've since removed almost all of these products from the business. P&G believes the resulting company will be nimbler, with slightly lower revenue but almost all of the earnings potential. In other words, it will be faster-growing and more profitable. Investors have yet to see evidence of that shift and executives warn that it could take a while before the payoff shows up in market-beating earnings growth. At the same time, all the trimming will be for nothing if P&G can't find a way to scale up the success it has had innovating around its Tide and Pampers brands.

For evidence that the rebound plan is working, shareholders should pay less attention to reported earnings and revenue over the next few years while focusing on organic sales growth, cash flow, and operating margin.