The shipping industry is notoriously cyclical. That can lead to a lot of turbulence for shipping companies, which have to navigate through these cycles to stay afloat. To help mitigate this volatility Seaspan (NYSE:ATCO) has chosen a business model built upon long-term charters, which helps insulate the company against the extreme bottom of the sector's volatility. That said, while most of Seaspan's vessels are currently signed to long-term charters, it has several newbuilds scheduled to be delivered next year which are currently without customers. That's a concern with the sector in the midst of a tough downturn.

Built on a strong foundation

Seaspan currently owns 86 containerships, which are backed by $5.7 billion of future contracted revenue with an average remaining maturity of five years. Overall, these contracts have staggered maturities, some of which run through 2034: 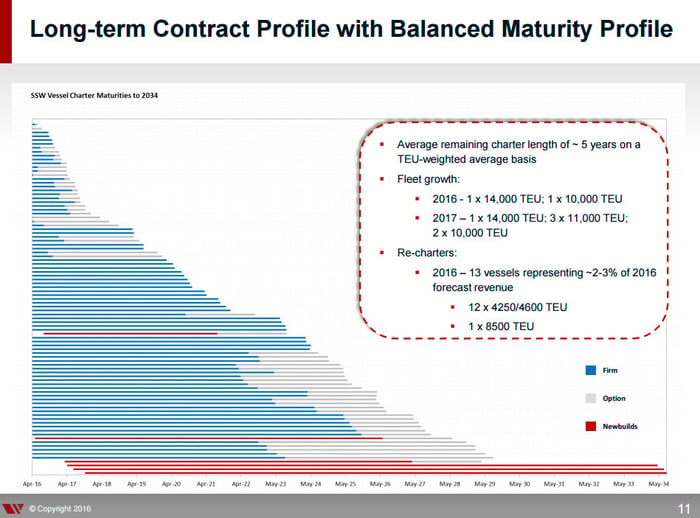 Because of the long-term nature of its charters, the company has limited recharter risk in 2016, which is proving to be a tough year for the sector. While it has 13 vessels that have contracts expiring this year, these are smaller vessels and only represent 2% to 3% of its revenue. 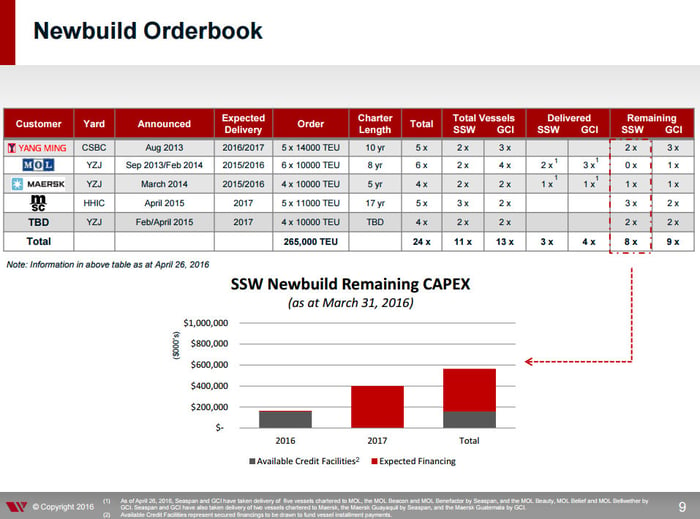 The risk of speculation

All that being said, the vessels not under contract constitute a risk that needs to be monitored. As that above slide noted, two of Seaspan's eight remaining newbuilds are not signed to customer contracts. Meanwhile, its joint venture with the Carlyle Group (NASDAQ:CG), GCI, also has two unsigned newbuilds scheduled for delivery next year. In other words, these vessels were built on speculation and not at customer request. As such, Seaspan and the Carlyle Group are on the hook for paying for these vessels when they're delivered next year, but might not be earning income from them right away. Under a worst-case scenario these ships will be docked, which would cost Seaspan more money.

It's a similar issue to one that's currently plaguing the deepwater drilling sector, which ordered a number of deepwater drillships when oil prices were high. Atwood Oceanics (NYSE:ATW), for example, ordered four ultra-deepwater drillships, with the last order being placed in June of 2013. That vessel was expected to cost $635 million and be delivered in late 2015. However, due to the downturn in the oil sector, Atwood Oceanics had to delay the delivery of that vessel and one ordered a few months earlier: neither had customer contracts in place, with Atwood Oceanics building both on speculation. As things stand right now, the latest dates Atwood Oceanics can take delivery of these vessels are in September of next year and June of 2018, even if it has to idle each upon delivery.

This highlights what makes building on speculation such a risky venture. While both companies were banking on the continued strength of their respective markets, that simply hasn't been the case. As such, both are now saddled with expensive newbuilds that have become a potential liability instead of a productive asset.

The market certainly sees Seaspan's uncontracted newbuilds as a liability. That's because there is a real risk that these vessels won't be chartered before delivery. This has become a weight on Seaspan's stock, which won't be lifted until the company can get these vessels under contract.