More for less but only for Staples' customers. Shareholders may look elsewhere. Image source: Staples

What: Staples (NASDAQ:SPLS) fell 13.7% in May 2016, according to data from S&P Global Market Intelligence. Fellow office supplies superstore Office Depot (NASDAQ:ODP) plunged even deeper, taking a 39.1% haircut over the same period.

The two companies were walking hand in hand toward a cash-plus-stock merger, having hurdled legal and regulatory roadblocks since February 2015. But the dream fell apart last month as the deal was blocked by a federal judge.

So what: U.S. District Judge Emmet G. Sullivan cited anti-competitive effects in his decision, which motivated Staples to officially drop its $6 billion takeover bid. At the end of the month, Staples CEO Ronald Sargent announced his resignation from a post he had held for nearly three decades.

"With the termination of the merger, we mutually agreed that now is the right time to transition to new management to lead Staples through its next phase of growth," said independent lead director Robert Sulentic. 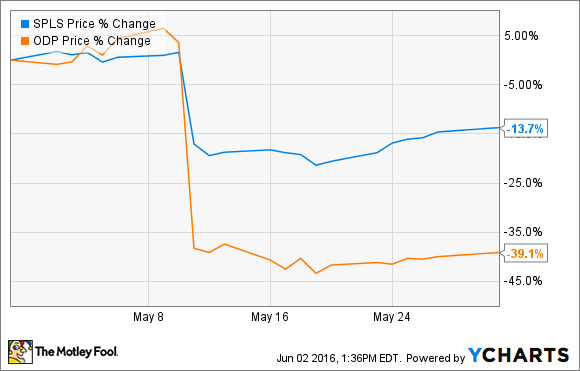 Now what: Office Depot shares have now dropped 34% below their prices before the merger announcement. Staples has not fared any better -- its shares have plunged 50% in 16 months.

Meanwhile, arch rival Amazon.com (NASDAQ:AMZN) saw its share price double, including a 9.6% surge in May. The e-commerce giant arguably held the executioner's blade over the failed merger, including a controversial testimony in April 2016. In that slice of courtroom drama, Amazon executives were allegedly given a deal-killing statement signed by the Federal Trade Commission, detailing how the company wasn't ready to compete in the enterprise-level market for office supplies and services. But Amazon struck that scathing language and said that it was ready for business.

In the final court decision, Sullivan noted that large customers have been able to lower their office supply costs thanks to competition between Staples and Office Depot. This was all the evidence he needed for deep-sixing the merger. And of course, having Amazon in the mix makes for an even more lively three-way rivalry. Consumers and corporate customers are the winners here, while profit margins will suffer on the supply sellers' side.

Don't cry for Ronald Sargent, who is due a $14 million golden parachute package. Office Depot is now worth about half of the proposed merger's price tag. Staples is the kind of stock that only a risk-tolerant income investor can love, thanks to its meaty 5.4% dividend yield.