So what?: Achillion Pharmaceuticals' shares were flying high in 2014 on optimism that its clinical stage hepatitis C program could attract a suitor. However, rather than being acquired, the company agreed to license its hepatitis C drugs to Johnson & Johnson (NYSE:JNJ) last summer, and shares have fallen since then. 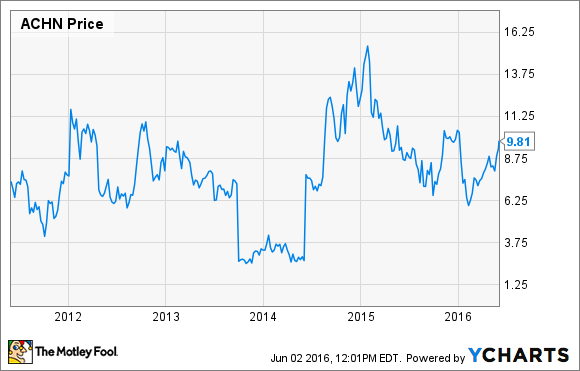 Phase 2a trial results evaluating eight week or less hepatitis C regimens including odalasvir are expected in the third quarter. If those results are positive, then Johnson & Johnson could conceivably begin phase 3 confirmatory studies soon thereafter in support of an eventual FDA filing.

Additionally, Johnson & Johnson's latest phase 2b trial including odalasvir began ahead of schedule last month and this 400 patient study of six- and eight-week regimens should wrap up by the end of July 2017.

Now what?: The market for hepatitis C therapies is massive.

There are over 170 million people with hepatitis C worldwide, including 3 million in the U.S. and another 9 million in Europe. As a result, the combined sales of hepatitis C drugs exceed $20 billion annually.

Although there's no guarantee that Johnson & Johnson's studies involving Achillion's drug will pan out, successfully shortening treatment duration to as little as six weeks could be market-share friendly. Currently, most hep C patients are treated over a period of at least 12-weeks.

If Johnson & Johnson's approach does demonstrate comparable efficacy and safety to current options, and shortens treatment duration, then Achillion could receive up to $1.1 billion in milestone payments and royalties in the mid-teens to low 20s percentage range on eventual sales.

Admittedly, competition in this indication is fierce, and current players are working on their own shorter-duration approaches, so it's far from a lock that Achillion Pharmaceuticals will profit even if its ongoing trials do succeed. Because of that risk, this company remains best suited for investors who can withstand the risk of disappointment.