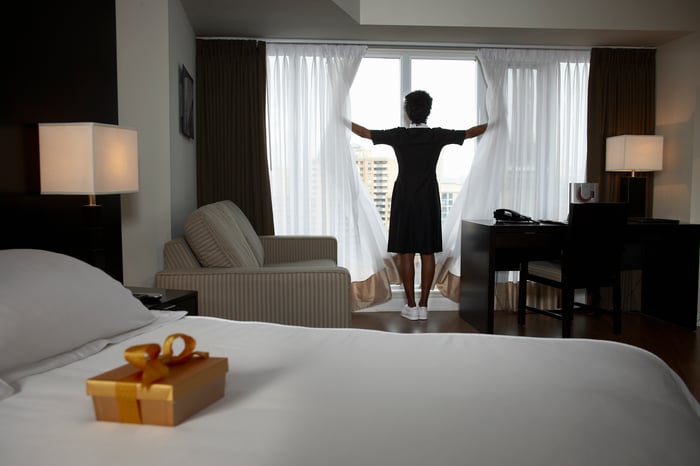 What: Shares of gun maker Starwood Hotels & Resorts Worldwide Inc. (NYSE: HOT) fell 10.3% in May, according to data provided by S&P Global Market Intelligence, as its merger with Marriott International (NASDAQ:MAR) came under fire.

So what: The owners of the Sheraton Grand Chicago and Westin Times Square in New York sued Starwood in May over their exclusivity in the areas around their hotels. Under terms of their contract with Starwood (which owns the Sheraton and Westin brands), the company can't operate another hotel in a defined area around these two hotels; Marriott owns hotels that would violate the agreement.

While this might not be a deal-breaker, it could postpone the merger as the lawsuit moves through the courts. Or the two hotels could sign modified agreements in the meantime. But this adds uncertainty, something investors don't like.

Now what: I don't think this really changes the investment thesis for Starwood; it will probably end up being a blip on the radar long-term. Still, it's worth keeping an eye on as challenges to the merger start to come in. Creating the largest hotel company in the world won't be as easy a task as some might have thought. But until further notice, it appears the deal will eventually go through.