What: Shares of Latin American airline Avianca Holdings (OTC:AVHO.Q) surged on Friday after The Wall Street Journal reported that the company is receiving bids for a capital injection that could turn into a full sale. At 3 p.m. EDT, the stock was up about 24%.

So what: According to the report, both United Continental (NASDAQ:UAL) and Delta Air Lines (NYSE:DAL) are among the companies considering bidding for Avianca. It is reportedly seeking a $500 million capital injection, but a full sale is not off the table, according to one of the people involved.

Avianca is large enough to move the needle for major airlines like United and Delta. The company recorded $4.36 billion of revenue in 2015, making it about 11.5% the size of United and 10.7% that of Delta. Shares of Avianca have plunged over the past few years, with the stock down about 63% since it went public in 2013, excluding today's gains. The slumping stock price may be enticing larger airlines to make a deal at a lower price than would have been possible a few years ago. 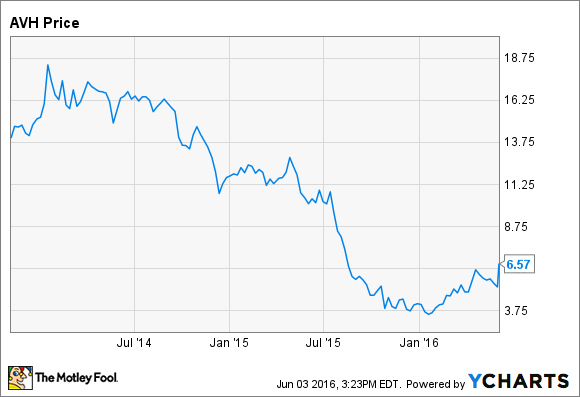 Now what: The process is in its early stages, according to the report, and there's always the chance that no deal ends up taking place. As always, buying a stock based solely on the hopes of a buyout is recipe for disappointment.