Business messaging start-up Slack, with a post-money valuation of $5 billion, is now nearly as valuable as former enterprise leader BlackBerry. Slack has about 5 million daily active users today, compared to just over two million users at the beginning of 2016. Nearly a third of those users pay for its service, which generated $100 million in recurring revenue last year -- more than triple the $30 million Slack reportedly generated in 2015.

That triple-digit growth has created lots of buzz about Slack going public. Let's discuss what we know so far about the potential IPO, which investors would profit, and whether or not this would be a good stock to own. In late 2015, Slack CEO Stewart Butterfield told The Australian that his company had "started an internal campaign for IPO readiness" a few months prior. That campaign included its first external audit, new controls, and security practices. The company is also boosting its spending on data analysis and infrastructure.

Butterfield stated that "the absolute earliest that we could IPO, if everything came together right, would be 18 months from now." He noted that while investors look for "predictability" in public companies, Slack's rapid growth made it "impossible to predict" where it would be in six months time. He also stated that initiating an IPO readiness program "doesn't mean we intend, want, or need to go public anytime soon."

But if Slack eventually goes public, the deal could make its early investors a lot of money. Most of Slack's current backers are private venture capital firms like Accel, Andreessen Horowitz, and Social Capital -- which are off limits to mainstream investors.

But that list also includes Comcast (NASDAQ:CMCSA) Ventures, the cable and media giant's venture capital arm. Comcast Ventures participated in the round of funding last year, which raised $200 million from six different investors. It's unclear how much money Comcast contributed, but it likely only accounts for a small percentage of Slack's valuation.

Another company to watch is Microsoft (NASDAQ:MSFT), which reportedly wanted to buy Slack for $8 billion but nixed that idea in favor of improving Skype as a communications tool. However, Microsoft recently unveiled a new venture arm called Microsoft Ventures, which will participate in "Series A and beyond" investments in North America and Israel. Microsoft might use that arm to invest in Slack without paying a hefty premium for the whole company.

Another potential acquirer is Amazon (NASDAQ:AMZN), which is reportedly interested in buying the company for $9 billion. That move would enhance Amazon's growing portfolio of enterprise tools, which already includes a Slack-like service called Chime. 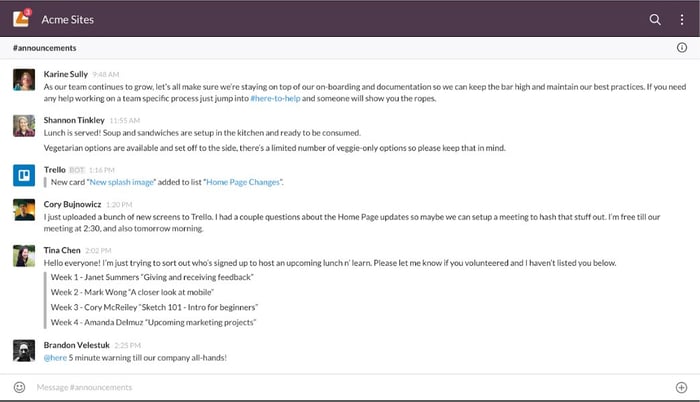 What if Slack went public?

If Slack went public today with a $5 billion valuation, it would be worth about 5 times its projected sales for 2017 -- which sounds reasonable compared to other high-growth stocks on the market. But Slack still isn't profitable, and going toe-to-toe with bigger tech companies can result in wider losses.

If Slack can keep growing sales at double- or triple-digit rates, get spending under control, and stop raising more valuation-inflating capital, its financials could look much more sustainable when it finally launches its IPO.

Slack is a hot start-up, but it's probably not ready for an IPO yet. It must first demonstrate that its sales growth is sustainable, that it can generate profits, and that it can widen its moat against bigger challengers. If it prematurely begins the IPO process before achieving those goals, the stock might crash and burn overeager investors.

When Can I Invest in the Slack Technologies IPO? @themotleyfool #stocks $MSFT $AMZN $FB $BB $CMCSA Next Article
Current