In several respects, Select Income REIT (NYSE: SIR), a real estate investment trust that specializes in industrial properties, is a good company. It's got an appealing geographical mix of assets, it's well in the black, and its occupancy rate nearly hits the ceiling. But there's one not-so-impressive number those following the stock need to keep a sharp eye on.

That figure is shares outstanding. Companies, of course, occasionally use their stock as currency when they buy assets, but Select Income REIT does it on a regular basis. In order to feed that habit, it's frequently floated new share issues over its relatively short lifetime.

That, of course, means dilution, one of the major bugaboos of any stock investor.

As an extreme example of a here-we-go-again stock issuer, Select Income REIT's per-share growth has been stunted. Look at how the share count has developed vs. quarterly per-share funds from operations (the most important profitability metric for REITs) over the past four years: 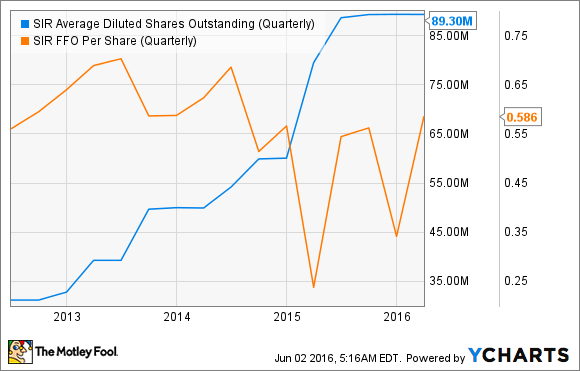 That FFO per share tally has basically gone nowhere. It would have risen impressively, had the company not pumped up its shares outstanding count by an awfully steep 186% across that stretch of time.

Blame for this can be laid at the feet of RMR Group (NASDAQ:RMR),  Select Income REIT's external manager (REITs can utilize either an external manager, i.e. a third party that controls its operations, or the can op to do that work in-house). Some years ago, RMR Group managed a REIT, Commonwealth, from which Select Income and several fellow REITS were spun out from. For more of the story, see this article.

What's particularly troubling about this relationship is that RMR Group's management fees are based on assets -- the more Select Income REIT holds, the more its manager gets paid. And guess how those asset buys are usually funded.

I believe this arrangement, and the resulting share inflation, are the key reasons why investors have been relatively cold to Select Income REIT over the years.

Even with a decent bullish run on the stock so far this year, investors remain cautious about the company. Here's a revealing set of valuations, again covering the past four years: 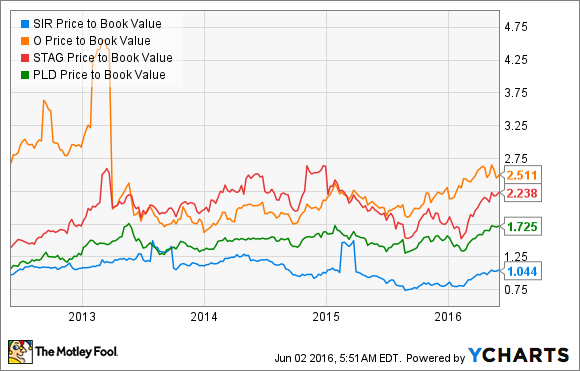 Select Income REIT currently trades at a price-to-book-value barely above 1; in other words, the market feels it's only worth the value of its assets. Fellow industrial REITs Prologis and Stag Industrial are well above that, while arguably the most popular retail REIT on the market, Realty Income, trumps it by 2.5x.

This lack of love is kind of a shame, because Select Income REIT is actually doing quite well in terms of fundamentals these days. Much of its real estate is located in Hawaii, an atypical niche for the REIT market. The company holds numerous choice properties in the Honolulu area, plus it's well represented in most states on the U.S. mainland.

Its overall occupancy currently hovers just under 98%, while in its most recently reported quarter the company grew normalized FFO by an impressive 18% on a year-over-year basis (to $66 million). Total rental income also saw a nice boost, by 22% to almost $100 million.

And although RMR Group/Select Income REIT loves to buy assets, it added only a few properties over that particular one-year span. Instead, the improvements were due to good, solid, old-fashioned fundamental improvements.

But that's not going to erase the very understandable concerns over how it's managed, and particularly that growth in share count. I don't see RMR Group changing its ways anytime soon, if ever. So for anyone interested in the stock for any reason, shares outstanding is the number to watch -- and worry about -- with Select Income REIT.