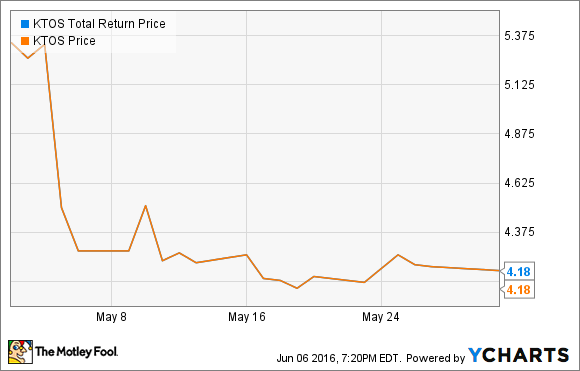 Clearly, something big (and bad) happened to Kratos last month. But what? KTOS Total Return Price data by YCharts.

"Sell in May and go away." I'm betting a lot of investors in Kratos Defense & Security (NASDAQ:KTOS) wish they had listened to that ancient bit of stock market wisdom.

Kratos stock cratered just a few days into the start of the dreaded month of May. Not coincidentally, this was also the month when Kratos reported its earnings for fiscal Q1 2016 -- and as you may surmise from the chart above, the news was not good.

So what went wrong? Let's review.

1. The numbers were terrible

Management tried to turn the focus away from its recent losses, of course, and encouraged investors to look farther down the road toward military contracts for the development of unmanned aerial vehicles (i.e. "drones") that the company has recently won, or hopes to win. Ideally, these will yield revenue growth in the future. But management provided little in the way of guidance on expected revenues (or profits) to encourage investors to hang around and see how things turn out.

One of the reasons Kratos has been posting losses and burning cash is that the company has been self-funding the development of a new combat drone that it hopes the military will buy. Dubbed the UTAP-22 Tornado, Kratos's new drone has been performing well in initial tests, and promises to produce a viable, jet-powered drone alternative to the prop-driven Predator drones that currently dominate the military's drone air force.

The problem is that the U.S. military is not known for its eagerness to buy new-fangled hardware built "on spec," preferring instead to tell its contractors what it wants them to build (regardless of price). In recent years, we've seen defense-tech companies develop cheap, effective prototypes of fast-missile boats for the Navy, lightweight robotic tanks for the Army, and -- yes -- even an off-the-shelf fighter jet tailor-made for low-intensity conflicts and tight defense budgets.

All of these projects continue to languish. The military hasn't bought a one of them.

3. But they're paying out of pocket

Kratos' Tornado could very well turn out to be the best thing since sliced MREs, but if Kratos fails to win orders for the weapon from the military -- big orders, worth multiple millions -- the project could turn into just one big sunk cost for Kratos stock. Management isn't exactly emphasizing this possibility, but it does acknowledge that it has made "significant discretionary internally funded investments" in the development of the Tornado.

How "significant" isn't exactly clear. But S&P Global Market Intelligence figures show that Kratos' research and development spending, which never amounted to much more than a couple million dollars annually last decade, suddenly quadrupled in 2011, then doubled again in 2012, and has continued running at an elevated level ever since -- in the same years in which Kratos was presumably putting UTAP together.

Since the company's R&D spending surge began in 2011, Kratos has invested more than $80 million of its own money in these and other development efforts. Investors can certainly hope that all these chickens will come home to roost, and begin laying golden eggs for Kratos. But the future's far from certain -- and I suspect that's a big reason Kratos' stock price is suffering.