Investors are often drawn to fertilizer stocks for above-average dividends and growth potential, as the world needs to increase food production to feed a growing population; but a confluence of headwinds have smacked fertilizer manufacturers in recent years. Potash Corp (NYSE:POT), the world's largest fertilizer producer, has certainly felt the economic impacts of falling commodity prices and a restructuring of the potash industry. The stock is down 70% in the last five years. 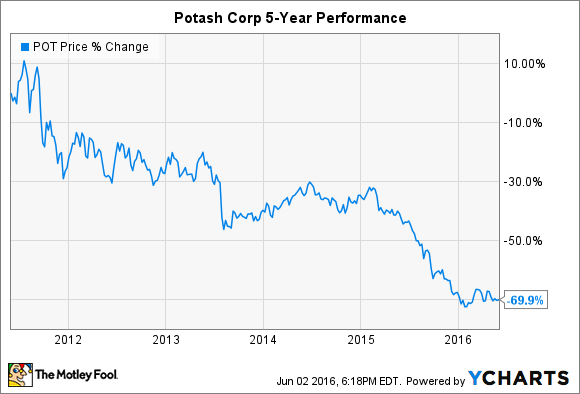 Despite recent hardships, the fertilizer industry is understood to be cyclical. That means recent trends have to reverse eventually, right?

While it's certainly possible, several indicators hint that investors may need to continue weathering the industry's current volatility. Here are three reasons Potash Corp stock could fall, which will be followed by an article presenting the opposing perspective, in the coming weeks.

During the last industry upcycle that peaked in 2008, fertilizer companies touted investments in production expansion projects that would allow them to sell higher volumes of much-demanded agricultural nutrients. It seemed like a good idea at the time.

The three major nutrients -- potash, phosphate, and nitrogen -- were all selling at record-high prices. The optimism quickly faded, however, especially for potash, and by default, the world's largest producer of it: Potash Corp.

Selling prices fell precipitously after the global economic slowdown in 2009 -- again after the surprise dissolution of a major potash cartel in 2013. They have continued their downward slide since mid-2015 thanks to lower grain prices. (Farmers had less to spend on agricultural inputs.) In response, Potash Corp temporarily closed its Picadilly, New Brunswick facility in January, and expedited the permanent closure of its Penobsquis facility near Sussex, New Brunswick last November. Those actions will help to resolve inventory problems in the long run; but the markets won't respond immediately. Unfortunately, prices are likely headed even lower in 2016.

Excess potash inventories have given buyers the upper hand when negotiating contracts -- and major importers India and China aren't wasting the opportunity to exploit their power. Both countries, which consumed one-third of global potash in 2015 and often set the tone for global contracts and spot prices, delayed signing import contracts earlier this year, and are attempting to wrestle even lower potash prices than agreed to in 2015. India and China represented 15% of Potash Corp's total potash sales by volume last year.

Another unknown is China's hesitation to even enter contracts. The country's rapidly growing economy has abandoned fixed contracts for spot-market purchasing of other commodities in recent years, and now analysts are entertaining the idea that potash is next. That can work both ways -- favoring China or favoring producers, depending on market conditions -- and Canpotex, the North American cartel to which Potash Corp belongs, could be well positioned to respond. Right now, however, the potential for any structural changes by the world's largest potash consumer represents an unknown for investors.

Another potential red flag for Potash Corp is China's growing ability to support its own potash consumption with domestic and domestically owned supply. In 2016, the country is expected to produce nearly two-thirds of its consumption. The trend could shrink an important market for exporters, and therefore result in even larger excess supply. Canpotex has managed to increase its exposure to China by 33% since 2013, so investors will want to keep an eye on events as they unfold.

Potash Corp steadily increased its quarterly dividend from just $0.03 per share in early 2008 to $0.38 per share in the first quarter of 2016 -- not bad considering the headwinds above. Moreover, a falling share price during the same period resulted in a hefty yield for investors.

But persisting market headwinds proved too powerful, and forced management to lower the quarterly dividend to $0.25 per share. While it was a fiscally responsible move for the long-term health of the company, additional dividend cuts could be in store for investors if potash markets don't stabilize. Unfortunately, there's no telling how long the current rut will last -- or how much further prices can fall.

The high dividend yields sported by fertilizer stocks -- currently sitting at 6% for Potash Corp -- might attract investors, but the potential opportunity represented by the industry remains clouded by several big unknowns. As difficult as it may be to believe, current market indicators hint that things could still get worse before they get better. For balance, I'll explore three reasons why Potash Corp's stock could rise, in an upcoming article.