What: After Flexion Therapeutics (NASDAQ:FLXN) announced plans to raise $77 million from the sale of newly issued stock, its shares were down 12.8% at 1:30 p.m. EDT today.

So What: Flexion Therapeutics' shares have rallied recently following news that the FDA said its existing trial data can support a filing for a new drug application for Zilretta, the company's lead drug candidate. 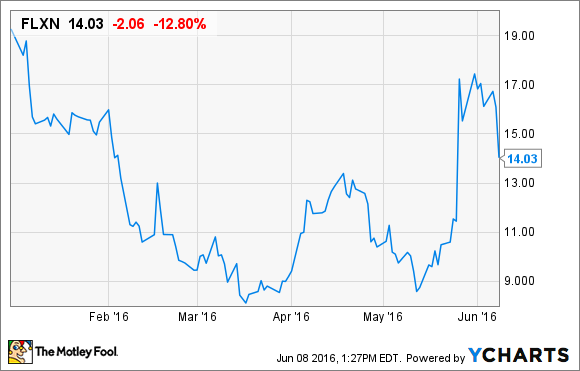 Zilretta is being evaluated as a potential therapy to treat knee pain in osteoarthritis patients. In clinical trials, Zilretta delivered a median 50% improvement from baseline in knee pain over a three month period. Now that the company has been told that its findings can be used to file Zilretta for FDA approval, management is taking steps to firm up its finances to support building up a sales team and related infrastructure ahead of a potential FDA approval and Zilretta commercialization.

Overall, the gross proceeds from this 5.5 million share offering will be $77 million. While the company didn't disclose how much it will pay in fees, it should be able to pocket the vast majority of that money. Considering that the company had nearly $100 million in current assets exiting March, the offering should give the company plenty of financial firepower to get Zilretta across the finish line.

Now What: It's common for clinical-stage companies to raise money, and stock offerings are arguably a far-better source of financing than expensive debt. Therefore, investors might want to focus less on this offering, and more on the potential market opportunity for Zilretta.

There are roughly 12 million people in the United States who visit their doctors because of knee pain caused by osteoarthritis every year, and 5 million of those patients are treated with quarterly shots of corticosteroids. However, corticosteroids' pain-relieving effects often begin to fade after a few weeks; as a result, there's a need for a new standard of care.

If Zilretta can secure an FDA green light, and win over doctors to become that standard, then the sheer size of this market could make Zilretta a blockbuster drug -- especially because management thinks it can price Zilretta at about $500 for each quarterly dose. An FDA go-ahead, however, is far from a lock, and that means that investing in Flexion Therapeutics is still risky. If the FDA rejects Zilretta, then Flexion Therapeutics shares could collapse.

Nevertheless, because Zilretta targets a blockbuster indication, and it's soon to be on its way to the FDA, this company is one of the more-intriguing clinical-stage drug companies out there. Therefore, risk-tolerant investors might want to view this drop as an opportunity to buy.