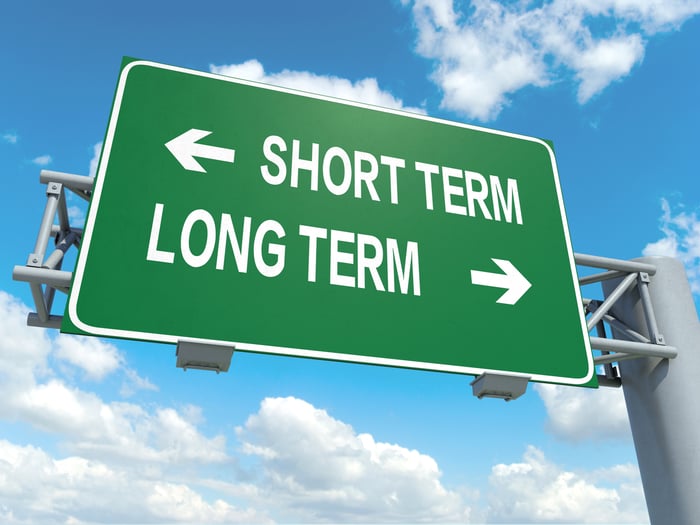 In times when almost everybody is paying attention to instant news and short-term movements in the stock market, having a long-term mindset can be a powerful strategy to differentiate yourself from other investors and obtain an investing edge. Time is on your side when you invest in top-quality companies with solid fundamentals, so the longer you can hold on to those positions, the bigger the returns you can expect from them.

With this in mind, our contributors share with readers three companies they are planning to hold for years and decades to come -- perhaps even forever.

Andres Cardenal: Alphabet (NASDAQ: GOOG) (NASDAQ:GOOGL) is the biggest position in my personal portfolio, and I'm not planning to sell the stock anytime soon. The company operates in a dynamic and always-changing industry, so it's important to watch the emerging trends in technology to make sure Alphabet is well positioned to continue thriving in the future. However, the company is a unique business to hold over the long term.

In 2015, the company formerly known as Google changed its name and corporate structure to better reflect its diversified business model. Alphabet is a holding company of which Google is the most important component, while the "Other Bets" segment covers different projects and initiatives in areas such as self-driving cars, home connectivity, and futuristic healthcare technologies, among several others.

Google is the undisputed global leader in online advertising. The brand is so dominant that many consumers use the term "Googling" as a synonym for online search, a privilege only the most powerful brands in business history enjoy. The company has built an enormously valuable ecosystem featuring seven different properties with over 1 billion monthly users each: Google Search, Android, Maps, Chrome, YouTube, Google Play, and Gmail.

Many of the initiatives in Alphabet's other bets segment have limited commercial viability in the short term; however, when seen as a diversified portfolio of projects in highly disruptive technologies, they offer intriguing potential for growth and innovation in the years ahead.

Todd Campbell: Although patent expiration means every drug will eventually face off against competition, investors who focus on top-tier companies like Celgene Corp (NASDAQ:CELG) for the long haul can insulate themselves against some of that risk.

Celgene's Revlimid is the most widely used first- and second-line therapy in multiple myeloma, and its Pomalyst is among the most commonly used drugs in third-line patients. Because of its market-share leadership, Celgene hauls in billions of dollars a year from these two drugs, both of which have patent protection stretching deep into the middle of the next decade.

Celgene also sells pancreatic cancer drug Abraxane and psoriasis drug Otezla. Abraxane's sales are leveling out at an annualized run rate of about $1 billion (sales inched up 1% year over year in Q1), but Otezla may just be getting started. Sales of Otezla, which won FDA approval in 2014, skyrocketed 224% to $196 million last quarter.

Overall, Celgene's drugs generated almost $2.5 billion in first-quarter sales, up 21% from last year. That's pretty remarkable, but more remarkable may be Celgene's long-term revenue forecast of at least $21 billion in 2020.

Getting to $20 billion in sales will require label expansions for its existing drugs, but Celgene could get some help from GED-0301 and ozanimod soon, too. GED-0301 is being studied in Crohn's disease, and results from that trial could be available next year. Meanwhile, Ozanimod is being evaluated in ulcerative colitis and multiple sclerosis, and results from those two trials could arrive in 2018 and 2017, respectively.

Overall, because Celgene is a top-shelf biotech with an enviable pipeline, it's one stock I don't see myself ever selling.

Matt DiLallo: I have owned units of pipeline company Enterprise Products Partners (NYSE:EPD) for nearly a decade. I don't plan on ever selling because the company has all the characteristics I look for in a long-term holding.

First of all, it's built on a strong foundation, with more than 85% of its cash flow secured by fee-based assets that are under long-term contracts. This provides tremendous financial stability. Further, unlike a lot of other MLPs, Enterprise Products Partners doesn't distribute all of its income to investors. Instead, it has retained billions of dollars in cash flow over the years that it has used to help fund growth projects. That fiscally conservative approach has earned it one of the highest credit ratings in the MLP sector.

That financially conservative approach combined with the long-term nature of the company's assets form a solid core that generates steady earnings. Meanwhile, the tectonic shift in the energy market over the past few years thanks to the explosive growth of shale provides Enterprise Products Partners with decades of growth opportunities to expand its midstream system.

Add it up, and this company has a very strong future, which is why I see it fueling a growing supply of income into my portfolio for years to come.