Wingstop (NASDAQ:WING) saw its stock jump in May, powered in part by rapidly rising franchise fees and better sales at its stores.

What: The chicken wing chain's total revenue grow by 16% in Q1, while its total number of restaurants climbed to 873 globally, a 17.2% jump. In addition, the company saw domestic same-store sales increase by 4.6%, with net income climbing to $4.3 million, or $0.15 per diluted share, compared with $2.6 million, or $0.10 per diluted share during the previous year. Most importantly, Wingstop saw royalty revenue and franchise fees go up 21% to $13.5 million from $11.2 million in Q1 last year.

That was enough to send shares in the company from an April close of $24.94 to finish May at $27.90, a nearly 12% gain, according to data provided by S&P Global Market Intelligence. 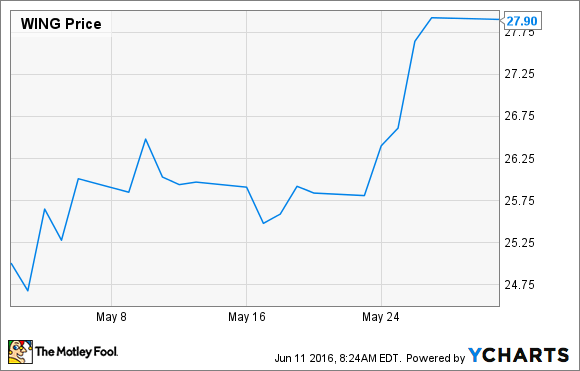 So what: Wingstop has been able to steadily add franchises at a time when the overall restaurant business has been challenging. CEO Charlie Morrison believes that the company should be able to keep its momentum going.

"We continue to execute on our growth strategy which has resulted in a strong start to 2016, and we are raising our annual earnings guidance for 2016," he said in the earnings release.

The chain opened 28 new restaurants during the first fiscal quarter and now has locations in 39 states and six countries, a unit growth rate of 17% over the prior-year period.

Now what: The company has to not only keep adding locations it has to keep growing sales at existing stores, something it plans to do in part by changing how it advertises.

"At our Wingstop International Convention held in April, our domestic franchisees voted to accelerate our path to national advertising by one full year as compared to our previous expectation," Morrison said. "We will commence our transition and become a national media buyer at the beginning of 2017. This decision will benefit all domestic restaurants across the country by making television advertising available to every market, which we expect will increase brand awareness as we continue our domestic growth."

That's a big move that marks the company's transition to becoming a national brand. Of course it's not quite 2017, but Wingstop remains confident in its short-term prospects, as the company has raised its guidance for the rest of 2016. Wingstop now expects total revenue between $89 million and $90 million (up from $88 million and $89 million), an increase of 14.1% to 15.4% from 2015. To make that happen, the chain expects to add 125 to 135 net systemwide restaurants, a 15% increase.

Here's Why Wingstop Inc. Gained 12% in May @themotleyfool #stocks $WING Next Article
Current