Oil's steep dive has taken a growing supply of oil-fueled dividends with it. According to analysts, investors are going to be out a whopping $7.4 billion in lost income this year due to dividend reductions in the oil patch.

Not all oil dividends are in danger of being reduced, though. In fact, there are a few oil stocks that actually are in a position to increase their payouts. Here are three that we believe could boost their payouts before the year is out.

But that doesn't make it a worthy investment. As a matter of fact, it remains one of the more risky investments in oil production.

BP Prudhoe Bay Royalty Trust isn't a company, but a straight income play on the royalty interest rights of the Prudhoe Bay oil reserve, which is held by the trust. According to the trust, the assets are on track to stop meeting the minimum standards to support the trust by 2020.

In other words, an investment in this trust is a 100% bet on oil prices climbing substantially from here, and staying higher for a prolonged period. If oil prices don't go up (and stay up), the reduced financial payback of production from the Prudhoe Bay oilfield will continue to erode the value of shares of the Prudhoe Bay Royalty Trust, making it even less likely that trust investors will break even at this rate.

Bottom line: Oil prices are rising, and the BP Prudhoe Bay Royalty Trust's distribution is going to go up from here -- but that doesn't make it a worthy income investment. If you're looking for a dependable dividend with steady increases, you're better off looking somewhere else.

Tyler Crowe
I'm kind of cheating, because pipeline and processing company Enterprise Products Partners (NYSE:EPD) has already raised its dividend once this year. Based on its history, though, we can probably expect the company to raise it again. After all, it has raised its dividend every year since its IPO back in 1998, and it's now on a streak of quarterly dividend increases that goes all the way back to 2005. 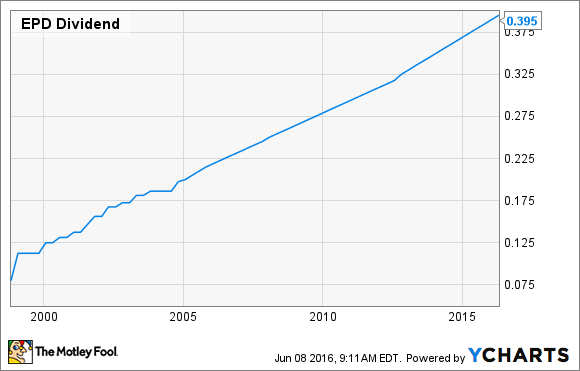 There are several reasons for this close-to-20-year streak of dividend increases: predictable revenues from fee-based services, integrated services that can offset weakness in one segment, and a well-maintained balance sheet. During a specific time period, though, what really sticks out is Enterprise's management team, and its disciplined capital allocation.

While so many other master limited partnerships and pipeline companies have felt the pressure to quickly raise payouts to unsustainable levels in the event of a market downturn, Enterprise's management made the conscious decision to maintain its steady payment growth, and leave a large cushion between what it brought in every quarter and what it paid out. This cushion has allowed the company to invest organically in new projects, and keep from being reliant on the whims of the market to make decisions.

Yes, Enterprise Products Partners raising its dividend in 2016 is a slam dunk. Chances are you'll be able to say the same thing in 2017, 2018, and for even longer.

Matt DiLallo
Occidental Petroleum (NYSE:OXY) pays a pretty generous dividend of 4% these days. However, thanks to its cash-rich balance sheet and improving cash flow due to higher oil prices, the company could soon be in a position to increase its already lucrative payout.

As of the end of the first quarter, Occidental Petroleum was sitting on $3.2 billion in cash. For perspective, that's enough cash to fully fund the company's 2016 capital expenditures budget with room to spare.

Occidental Petroleum doesn't need that cash to fund capex because it's generating enough operational cash flow to do the trick. In fact, last quarter, the company generated $820 million in operating cash flow, but only spent $700 million on capex. It did need to cover its dividend with cash last quarter, because its payout currently costs the company roughly $550 million per quarter.

However, what's worth noting about last quarter's results is that Occidental Petroleum only realized $29.42 per barrel of oil. With oil now around $50 a barrel, the company's cash flow is poised to surge. In fact, Occidental's cash flow was averaging more than $1.3 billion a quarter when oil was around $50 a barrel last year. In other words, if oil stays at this price, Occidental Petroleum could easily cover its capex and its dividend at its current run rates.

Things will get interesting if oil keeps rallying, because the company would start generating excess cash flow. Given its already rich cash position, Occidental Petroleum could use some of that excess cash to reward its investors via a higher dividend.