One of the greatest things about kids is that their minds are like sponges, ready to soak up all the knowledge you impart. That's why the moment your children show an interest in investing is the right time to begin buying shares, and teaching them some valuable lessons. Here are three key points to cover. 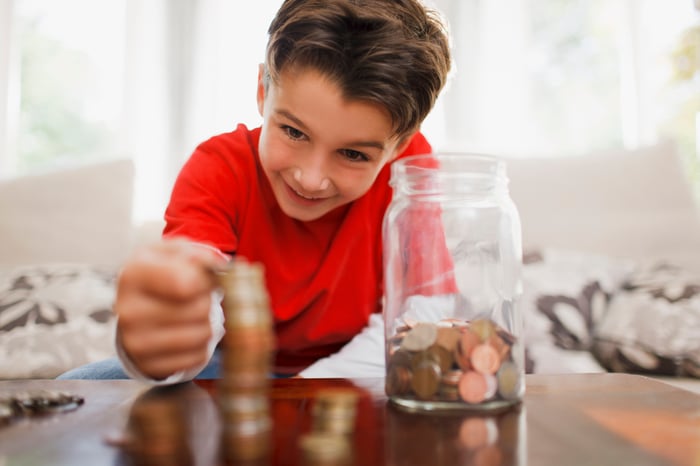 Your goal in introducing your kids to investing is to get them excited about the notion of putting their money to work. To that end, you'll need to discuss the concept of compounding. Compounding means earning interest on interest, and it's how so many people are able to grow their wealth by investing.

Here's a good way to explain it to your children. Let's assume you have $500 to invest at the beginning of the year, and that your investments generate a 5% return over the course of those 12 months. What this means is that, at the start of the following year, you won't just have $500; you'll have $525. What you can then do is take that $525, invest it, and earn money not just on the original $500, but also on the $25 you earned the previous year. Assuming that same 5% interest rate, you'll make $26.25 instead of just $25.

Of course, your kids may not be all that impressed by that extra $1.25 in earnings, so here's a more big-picture approach to compounding. Imagine you invest $500 and manage to generate an average yearly return of 5% over a 40-year period. By the end of that time frame, you'll have grown your balance to more than $3,500 by putting that money to work instead of sticking it in an envelope and hiding it under your bed. That's the beauty of investing, so remind your kids that the earlier they start, the better.

There are different types of investments out there, some riskier than others. Bonds, for example, have historically been less volatile than stocks, but they've also produced lower returns. Your children should understand that there's risk involved in investing; but that greater risk often means more reward.

Assuming your children are tempted to dabble in stocks, your next step is to explain that many of the companies they know and love are publicly traded. From there, let your kids pick shares from the companies they're most interested in. Have a Disney enthusiast? Add some shares to your portfolio. Have a Big Mac fan in the house? Invest in McDonald's. The key is to get your kids excited about investing by letting them pick stocks that actually mean something to them.

If you've got multiple children, you can have even more fun. Let each one pick a couple of stocks and make a game out of it to see whose investments will perform better.

Your kids should understand that investing sometimes involves losing money. That said, the great thing about the stock market is that you don't actually lose any money until you sell off your investments at a loss. So let's say you buy 10 shares of a given company at $20 per share, and that after a month, the value of those shares drops to $15 apiece. At face value, it might look like you've lost money, but in reality, you're not out a dime unless you sell those shares at that lower price point.

The lesson you really want to impart here is that investing, especially in stocks, often means riding out many downturns; so the key is to be in it for the long run. The stock market has a strong history of rebounding, and if your kids are willing to be both strategic and patient, there's a good chance they'll come away winners in the grand scheme of things.

If you're serious about setting your kids on a solid financial path, your best bet is to teach them about investing as early as you possibly can. Better yet, set up an investment account when they're young, and designate its proceeds to your kids' college fund.

When they're a bit older, they'll understand where that money came from. And with any luck, once they grow into responsible adults themselves, they'll apply those teachings to their own lives, and go on to be financially successful in their own right.

How to Teach Kids About Investing: 3 Ways to Get Started @themotleyfool #stocks Next Article
Current