Social Security is a valuable safety-net for tens of millions of Americans and many of those Americans rely heavily upon the program to pay for their daily living expenses. If, however, you've accumulated enough in retirement savings, or have other sources of retirement income, such as a pension, you may be considering investing your Social Security income rather than spending it. If that's the case, then focusing on high-quality dividend-paying stocks could pay off. Historically, dividend-paying stocks have outperformed their non-dividend paying peers and given that retirees are living longer than ever before, a long-term dividend strategy may be the best approach. With that in mind, here are three high-qualify dividend stock ideas to consider owning in your retirement portfolio.

Microsoft Corp. (NASDAQ:MSFT) may be best known for software used to run PCs (Windows 10 is installed on 200 million devices worldwide), but it's quickly transitioning itself into a major player in online cloud-computing too.

Couple Microsoft's cloud-computing opportunity with its leading position in gaming, via Xbox, and online search, via Bing, and you have a company offering far more upside opportunity than the slowing PC market would seem to indicate.

If so, then retirees with Social Security income to invest might want to consider owning Microsoft as a core holding in their dividend portfolio. Microsoft's already got a cash stockpile that's north of $100 billion (yes, with a "b") and its dividend has increased steadily since its inception in 2003. Currently, Microsoft shares yield a healthy 2.76%. ExxonMobil (NYSE:XOM) might not be the bargain it was last August when crude oil prices per barrel were nose-diving, but its shares are still trading more than 10% below their 2014 peak and global demand for crude oil and natural gas products isn't shrinking.

While smaller independent oil & gas companies may offer more dynamic opportunities for return, they also come with substantial risk. Commodity prices are exceptionally volatile and energy projects are costly, so many of these companies are highly leveraged.

Because those smaller companies' balance sheets can be stretched thin, they're often forced to sell prime assets when commodity prices fall and that can be a boon to big players with rock-solid balance sheets like ExxonMobil. In those instances, ExxonMobil is perhaps the best positioned in the industry to hunt for bargains.

Importantly for income investors, ExxonMobil also ranks as one of the best dividend-paying stocks in the industry. Over the past 33 years, its dividend payout has climbed by an average 6.4% annually. Currently, shares yield 3.36%.

After years of struggling to offset the loss of revenue stemming from the patent expiration on Lipitor in 2011, Pfizer Inc. (NYSE:PFE) appears to be back on a growth track, and that could mean investors are about to be rewarded with steady dividend increases.

Prior to its patent expiration, Lipitor was bringing in peak annual sales of more than $13 billion. Once generics became available, sales steadily declined to less than $2 billion per year. Unable to make up for that drop-off, Pfizer was forced to get lean by cutting costs and shedding non-core assets.

Recently, management cited its growth as the main reason behind increasing its full year sales guidance for this year by $2 billion. The company now expects revenue to be at least $51 billion in 2016. Additionally, leveraging growth against its fixed costs is translating into earnings upside too. Pfizer's EPS forecast for this year is $2.38 , up from $2.20 last year.

Because Pfizer's got over $30 billion in cash and investments on its balance sheet and new fast-growing medicines, such as the cancer drug Ibrance and the anticoagulant Eliquis, there's good reason to think that dividend increases are coming. Especially, since Pfizer's management steadily increased its annual dividend payout despite its post-Lipitor expiration struggles. Currently, shares yield 3.44%. 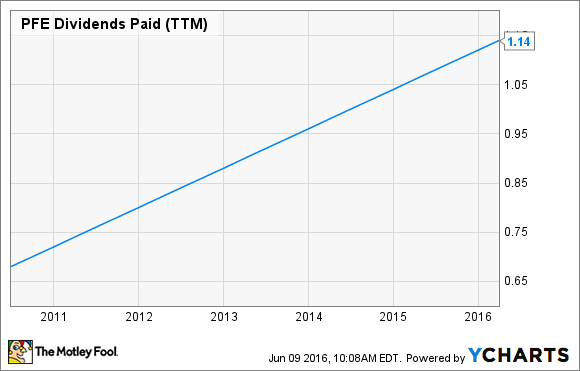 Because of the time value of money, investing Social Security income now can go a long way toward increasing the size of your estate later. For example, someone who invests $1,000 per month in Social Security income and earns a hypothetical 6% return annually for 20 years could end up with a nest-egg worth $441,430. If you find yourself in a position where you're able invest your Social Security income, then you might want to consider it. And, if you do, then investing in Microsoft, ExxonMobil, and Pfizer could be a good place to start.