The shipping sector is in the midst of a pretty rough storm. Weak trade growth is having an impact not only on shipping companies, but on container leasing companies like Textainer Group Holdings Limited (NYSE:TGH) and TAL International Group (NYSE: TAL). That being said, with great challenges comes great opportunities, which in this case has been industry consolidation. More consolidation could be on the way given that financial investors have been heading for the exits amid the industry's recent slump, which is opening up the opportunity for Textainer Group Holdings Limited to bulk up its own fleet.

TAL International Group was a big part of getting the consolidation wave started last year when it agreed to merge with private equity-backed Triton International. In doing so, the pro forma TAL/Triton will soon become the world's largest intermodal container lessor, bypassing Textainer Group Holdings Limited in the process. In addition to that transaction, a complex series of deals that saw two of the world's largest container shipping companies -- Cosco Group and China Shipping Container Lines -- combine to form the world's fourth largest container shipper. Further, another result of that deal was the combination of container leasing companies Florens and Dong Fang, creating the third largest container leasing company. These deals have dramatically reshaped container leasing sector's leader board, which can be seen on the chart in the upper-left hand corner of the following slide: 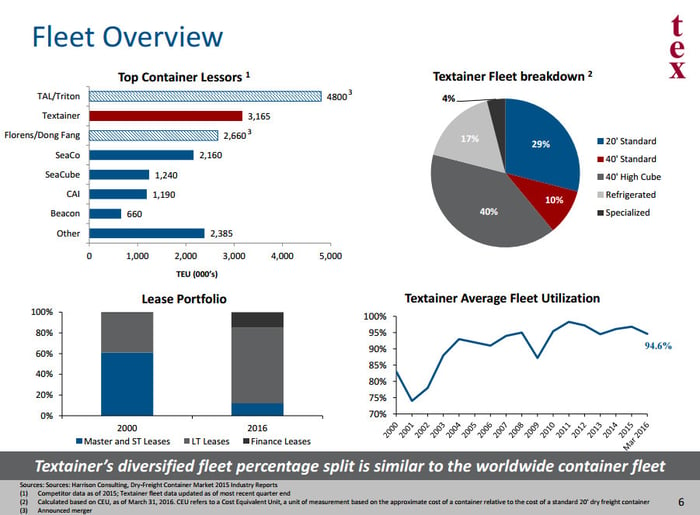 Textainer Group Holdings Limited hasn't stood by and idly watched its rivals bulk up their scale. Last quarter the company invested $228.3 million to add to its fleet, with a third of that amount going toward the purchase of the outstanding leases and containers from a financial investor that made the decision to exit the container leasing space. Given the cyclical downturn, there will likely be additional financial investors exiting the sector, which could open up more acquisition opportunities for Textainer Group Holdings Limited.

A sea of opportunities

While the recent mergers in the sector have concentrated the bulk of the sector's containers among the top three companies, the container leasing space is still fairly fragmented. More than 10% of the container fleet is owned by very small players that lack the scale to endure a really tough downturn in the sector. Many of these containers were initially purchased by financial buyers that took advantage of low interest rates and cheap container prices to build small container fleets. However, these buyers are now feeling the pain of the downturn, which could lead to additional exits.

Meanwhile, larger players like SeaCube and Beacon were acquired by financial investors a couple of years ago when the sector was still on the upswing. However, those investors might be reconsidering their decision to invest in the sector given that weak container demand has put significant pressure on lease rental rates. They could choose to follow the path of Triton's owners and seek a merger partner to enhance their scale. Given Textainer Group Holding Limited's overall scale, low leverage, and solid cash flow, it would make a great merger partner.

With the shipping industry under pressure, container leasing companies are consolidating in order to increase their scale and cut costs to improve profitability. Thus far Textainer Group Holdings Limited hasn't participated in the consolidation wave other than acquiring the assets from small financial investors. That could change if additional financial investors seek to exit the sector, with Textainer Group Holdings Limited in a solid position to capture these acquisition opportunities.