Stocks were in solidly positive territory on Wednesday, June 15 -- up until a slump hit indexes over the last 30 minutes of trading. By the closing bell, the Dow Jones Industrial Average (DJINDICES:^DJI) had lost 31 points or 0.2%, and the S&P 500 (SNPINDEX:^GSPC) shed 4 points, or 0.2%: 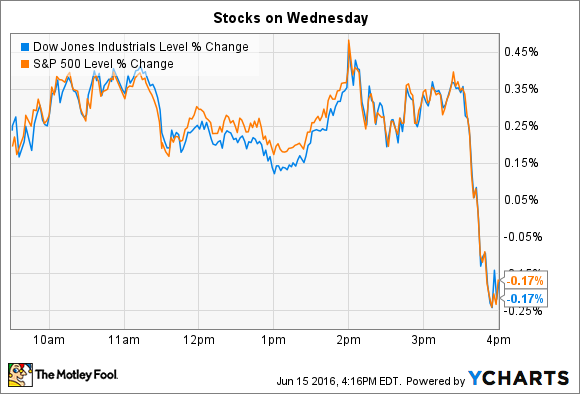 In economic news, the Federal Reserve declined to raise interest rates. In addition, officials lowered their projections for rate hikes over the coming months. The Fed cited slowing job market growth and pockets of economic weakness as reasons for proceeding with caution on any interest rate boosts.

Whole Foods was one of the worst decliners in the S&P 500, falling 4% to bring its one-year drop to over 20%. The stock has been slumping following news that the U.S. Food and Drug Administration recently found a number of food safety violations during inspections at a Whole Foods Market food preparation facility. The FDA cited "insanitary conditions" around cleanliness and employee training on products ranging from pesto pasta to couscous.

Whole Foods told The Wall Street Journal that it had already corrected all of the issues that the government flagged. "We've been in close contact with the FDA, opened our doors to inspectors regularly since February and worked with them to address every issue brought to our attention," a spokesman said. Yet the FDA wasn't satisfied with the response and has given the company two weeks to submit evidence documenting that it has changed its food-handling procedures.

Whole Foods' prepared foods segment is worth over $3 billion a year to the company and it's a big point of differentiation between it and other grocery stores. It's bad news for the brand that its prepping approach had been so lax, still, it's better for the company that any food safety issues be addressed now, before they spark a costly recall or, even worse, a disease outbreak.

Nucor's stock rose 2% following encouraging news on its business outlook. The steel giant announced that it expects to earn $0.67 per share in the current quarter -- well ahead of consensus estimates targeting $0.57 per share of profits. That result would mark a 70% earnings jump over the prior year.

Trade cases have succeeded in lowering the volume of imported steel lately, the company explained, which is helping lift prices by reducing competition. Nucor sees that trend only strengthening as tariff rates rise in the coming months. "Our expectation is that the final determinations in these cases will result in higher duties than the preliminary duties currently being collected," executives explained in a press release .

Meanwhile, prices are inching up for many other key products, including sheet steel, raising profitability in the process. While there are weak segments in Nucor's client base, particularly in the energy, heavy equipment, and agricultural markets, executives see more bright spots and believe the overall business is on the upswing. With the profit outlook improving, it's no surprise that Nucor's stock rose on Wednesday, adding to its impressive 25% gain since the start of the year.