Please ensure Javascript is enabled for purposes of website accessibility
Log In Help Join The Motley Fool
Free Article Join Over 1 Million Premium Members And Get More In-Depth Stock Guidance and Research
By Brian Stoffel - Jun 16, 2016 at 10:57AM

While nothing is guaranteed, all three of these stocks have clear catalysts to rocket them higher.

Let's start out with something that should be obvious: it is impossible to predict with anything near 100% certainty where a stock will head in a given timeframe. So while the headline might read "Stocks That Could Double," it could just as easily be: "Stocks That Could Go Nowhere."

But that doesn't mean you should ignore this article -- indeed, I do believe the three stocks mentioned here all have higher-than-average chances of doubling. That's because there are certain characteristics of stocks that double quickly.

For this article, I focused on four: stocks that are heavily shorted, have a history of stellar operations, are valued at fair to cheap valuations, and have clear catalysts to move them forward. Keeping that in mind, here are my candidates.

A railcar manufacturer on the skids?

Greenbrier's (GBX 2.71%) core business is in manufacturing and maintaining rail cars used to ship goods all over the world. Currently, 34% of Greenbrier's shares are sold short. Despite an enviable operating history, investors are worried that a global economic slowdown will sap demand for the company's railcars.

Those worries aren't unfounded: deliveries of railcars fell 35% during the first quarter, and the company's backlog shrunk, albeit by a relatively small amount. That has led to absolute bargain basement valuations.

Such prices are a clear indicator that there's downside protection in a Greenbrier investment.

The key thing to remember here is the Greenbrier is a best-in-class manufacturer of railcars. That helps explain how the company was able to almost quadruple sales in just six years coming out of the Great Recession. 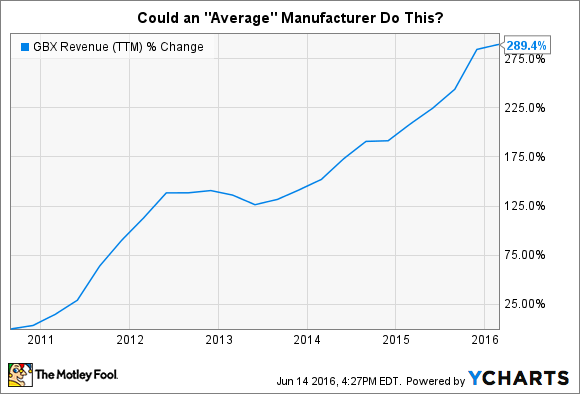 The catalyst here is easy to spot: the company's backlog needs to stabilize, and there need to be signs that the global economy isn't slipping into a recession. If that happens, don't be surprised to see this stock explode.

Wayfair (W 9.58%) is a totally different animal than Greenbrier. Many consider the company's stock to be very expensive, and it isn't anywhere near as capital intensive as a railcar manufacturer. Instead, Wayfair has become the go-to e-commerce destination for furniture and interior decorating.

Currently, about 64% of Wayfair's shares are sold short. That's a massive bet against the company by Wall Street. The bears' concerns are worth acknowledging: the company is rapidly reinvesting in itself, causing negative earnings, and it may eventually have to take e-commerce's king -- Amazon.com (AMZN 3.58%) -- head-on. That's a battle many think Wayfair would lose.

First, let's deal with valuation. Here's how Wayfair stacks up on traditional metrics.

That might not look impressive. But let's take a step back to think about this. The company trades for 50 times free cash flow. That's not cheap, but it's not outrageous when you consider a couple of factors: sales have grown by 56% per year since 2012, free cash flow is over three times higher than it was in 2013, and the number of active customers has grown from 2 million at the end of 2013 to over 6 million today.

Clearly, management is doing something right. And the more time Wayfair has to grab market share, the stronger its moat becomes. With such a high percentage of the stock being shorted, Wayfair's catalyst will likely come from a short squeeze. If this happens, it will almost assuredly be the result of the company continuing to improve sales and penetrate its markets, while simultaneously convincing Wall Street that its path to profitability is valid.

Can you trust management?

BofI (AX 4.53%), better known as the Bank of the Internet, is not a stock I'm crazy about. The company has continually hit just about every banking metric out of the park: it has a low efficiency ratio of 31.7% (low is good), deposits have grown by over 35% year-on-year, and earnings have jumped 44% during the past twelve months.

So what's the problem? Following a lawsuit by a former employee, followed by allegedly corroborating accusations from other former employees, Wall Street isn't sure it can trust CEO Greg Garrabrants. There are tons of accusations you can read more about here. But the bottom line is that sentiment has turned against the company -- 40% of its float is being shorted. As a result, BofI is cheap.

So why would I include such a dubious stock in this article? Because while I have my misgivings about management, I don't have any special knowledge that could prove that something is amiss in the company. I could just as easily be wrong -- and the shorts could simply be falling for a former employee with a vendetta against his employer.

If BofI can continue to produce stellar results, the shorts will be forced out. If the company undergoes any type of special audit -- say, if it tries to acquire the assets of another bank -- and is cleared, it would have an immediate and positive result.

So while I won't be putting any of my own hard money behind BofI, it's worth investigating for those with a taste for positive asymmetrical returns.

Ask a Fool: How Can I Find the Next Facebook or Amazon.com?