Nike's headquarter has produced some of the most iconic sports apparel ever made. Image source: Nike.

Nike (NYSE:NKE) and Adidas (OTC:ADDYY) are two of the most recognizable names in all sorts of sports across the world. And with more money flowing into professional sports and consumers putting more focus on health, they're both primed for a bright future. But if you could only buy one, which one would it be?

I think it's important to start this comparison by looking at the performances of Nike and Adidas over the long term. History doesn't necessarily predict the future, but in the sporting goods and apparel business, it can tell how a company has adapted to industry trends. And Nike is soundly outperforming its smaller rival in revenue growth, net income growth, and stock appreciation over the past five years. 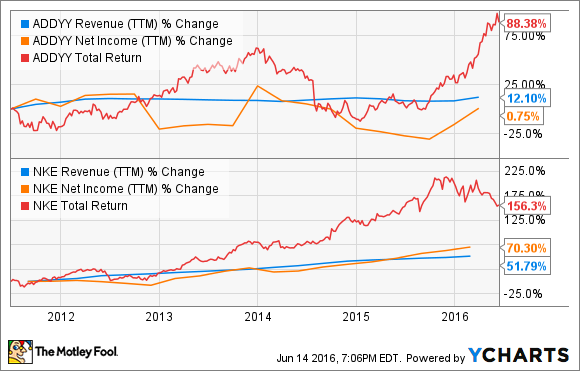 Nike has done a remarkable job of not only staying relevant for decades, but rarely missing a beat or market trend. Whether it's basketball, golf, or even casual wear, Nike is there, leading the way.

Adidas is the biggest name in soccer, but its weakness is that it's a small player in most other sports. It's falling behind Nike and Under Armour (NYSE:UAA) in high-revenue sports like basketball, golf, and running. Nike, on the other hand, plays in nearly every major sport and often has the No. 1 position. That diversity and dominance affords Nike the ability to sponsor major athletes to augment its brand.

Nike has a clear advantage in branding as well. Forbes estimates Nike's brand alone is worth $27.5 billion, compared to $7 billion for the Adidas brand. It's this brand that allows Nike to push into new markets and charge higher prices than competitors. With that said, Adidas still generates very strong margins in the markets where it plays. It's just not playing in as many markets as Nike. 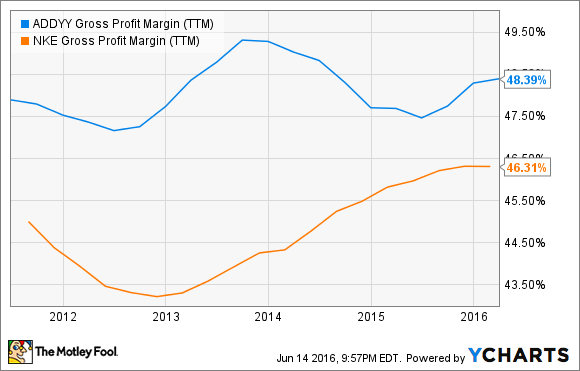 Nike is the winner today

Adidas is working from a smaller base, which could give it more upside potential, but I don't see much evidence that the company can jump ahead of rivals. Nike is the big kid on the block, and Under Armour is quickly growing as well. Outside of soccer, that leaves Adidas in third position or lower, which is a tough spot to be in for a retail brand.

The company also doesn't seem to have the resources to attract the kind of sponsored talent that could move it up the ladder outside of soccer. As it's done in the past, Nike can just poach the best players in the world with a bigger paycheck.

How Adidas could pass Nike

What Adidas needs to do to pass Nike from an investment perspective is prove the ability to take a dominant position in more sports. Under Armour recently gained a lot of credibility in basketball because of its deal with Stephen Curry, so a similarly lucky sponsorship deal would help Adidas. Adidas is trying, sponsoring four of the top six picks in the draft two years ago, but its commitment to basketball seems weak. It even walked away from its NBA apparel contract, losing it to Nike after the 2016-2017 season.

A design change could also be welcome for Adidas. The Nike swoosh has long been a "cool" brand around the world, but the Adidas logo doesn't inspire the same loyalty from customers. If the brand took some design risks, it could get customers that way.

At the end of the day, Nike is such a powerful presence in sports that it's a better investment option than Adidas. And without major changes from the smaller rival, I don't see that changing.