Energy has long been one of the largest segments of the economy and a huge opportunity for investors. But new factors over the past decade -- from climate change to technology innovations -- have threatened parts of the industry that were once extremely stable.

Energy can be a vast sector for investors, but below I've highlighted two reasons that sub-sectors of the energy industry once thought to be "safe" -- utilities and oil stocks -- may actually be names you should steer clear of in your portfolio.

Utilities aren't what they used to be

Since Thomas Edison invented the lightbulb, electricity has been on the rise -- until recently. You can see below that electricity consumption in the U.S. has been flat since 2007, and that's been a disaster for utilities across the country. 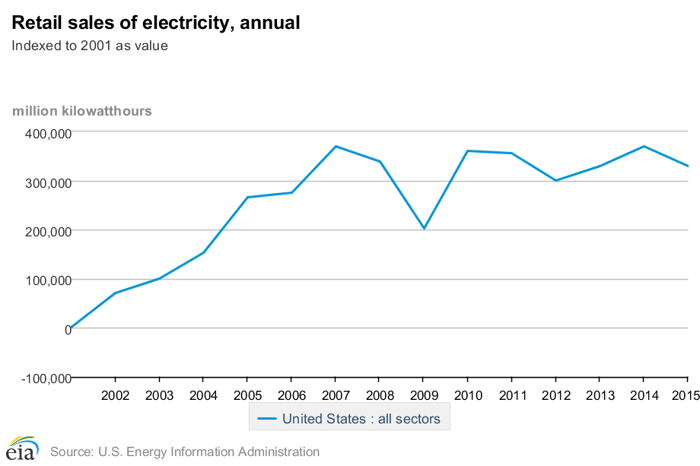 This demand dynamic has had a cascading impact across the industry. Wholesale generators were the first to feel it, resulting in lower prices for electricity and lower margins. You can see below that NRG Energy (NYSE:NRG), Calpine (NYSE: CPN), and Dynegy (NYSE: DYN) have all struggled to make money over the past five years, primarily because of the lack of growth in electricity demand. 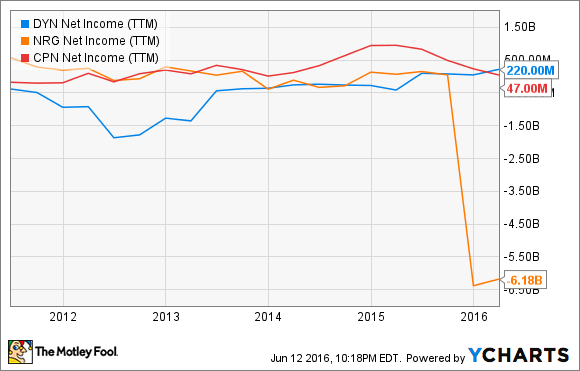 The problems facing wholesale companies are felt at traditional utilities as well. Even a regulated utility usually has an unregulated arm that's seeing slumping energy demand. And in the regulated arm, rooftop solar, efficiency, and eventually energy storage all threaten to push more and more customers away from the utility in question . For example, MGM Resorts recently decidedthat  it was worth paying $90 million just to leave a energy contract with NV Energy (the utility that primarily supplies Las Vegas with the power it needs to run those lights and slot machines) so it could buy its own energy. It should come as no surprise that scores of corporate customers are following that path as well. And on the residential side, SolarCity (NASDAQ: SCTY) (NASDAQ:SCTY.DL)CEO Lyndon Rive predicts that within 5 years solar will come with energy storage, reducing homeowners' need for electricity from the grid and even making it possible to go off grid entirely.

Owning utility stocks now is riskier than it's been in a century, and that's a reason to avoid an area of the market that used to provide consistent returns year after year.

The boom and bust of oil stocks

The oil industry is under fire from multiple angles. Electric vehicles are gaining adoption rapidly  in the auto world, and as the cost of batteries comes down and vehicle range goes up, an increasing number of consumers will be driving EVs. For larger vehicles, fuel cells hold promise as another attractive alternative to burning oil. On the regulatory front, the industry is facing growing scrutiny because of climate change, indicated by 195 countries agreeing in Paris last year to reduce greenhouse gas emissions. But these future headwinds are only part of the problem in the oil industry.

Low oil prices have caused at least 77 energy companies to file for bankruptcy since the start of 2015, and even the best-prepared companies with massive balance sheets haven't performed well against the market. You can see in the chart below that Chevron (NYSE:CVX), Royal Dutch Shell (NYSE:RDS.A), and ExxonMobil (NYSE:XOM) have all vastly underperformed the market, and were doing so even before oil prices started to fall.

Oil prices can be extremely volatile, and there's nothing investors can do to control that. And with alternatives like EVs and fuel cells coming quicker than most in the energy industry realize, I would hate to be an oil-industry investor right now. The energy source that won the last century won't win the next one; investors should invest accordingly.

Changes are coming to energy