What:  Shares of flooring retailer Lumber Liquidators Holdings Inc (NYSE:LL) are up 22.8% at 12:23 p.m. EDT on June 17, following an announcement that the company has reached an agreement with the Consumer Product Safety Commission, over Chinese-made laminate flooring sold from 2011 through May 2015. Since mid-May that puts shares up nearly 43%, though they are still down over 86% from the all-time high: 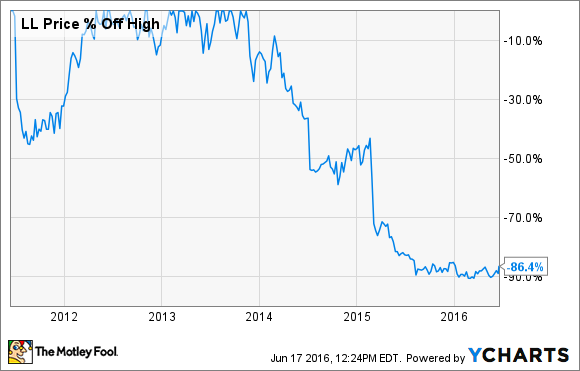 So what:  There's no denying that this agreement with the CPSC is a huge deal for the company. A product recall would have cost tens of millions of dollars, further harmed the company's image, and potentially even pushed it into bankruptcy, so it's hard to understate the importance of getting this relatively favorable finding from the CPSC.

To the contrary, the CPSC press release makes it clear that removing the flooring could increase exposure to formaldehyde emissions, and that so far, none of the customers who have gone through the testing process, including a group of customers who have had testing done on samples of their flooring, have had their floors test above the remediation guidelines. From the CPSC release:

Today's announcement is not intended to cause consumers to pull up Chinese-made laminate flooring installed in their home.  That approach could expose residents to increased formaldehyde levels.  Instead, consumers should contact Lumber Liquidators to participate in this testing program.

Out of an abundance of caution, Lumber Liquidators has tested the air quality in more than 17,000 households and has retained third-party certified laboratories to conduct formaldehyde emissions tests for about 1,300 of those consumers' floors.  None of those floors has tested above the remediation guideline.

In short, the testing program that Lumber Liquidators put in place will remain in place, with the key change that the CPSC will monitor the process and make sure Lumber Liquidators is quickly working with any customers who have formaldehyde emissions levels above the levels outlined in the agreement.

Now what:  This is a big step forward -- and away from this awful period for the company -- but it's not the end of the story. Two big risks remain:

They aren't independent of one another. The bottom line is that the company has continued to struggle to bring customers back, and as long as this story plays out in the press, it will remain difficult to change consumer perception. In other words, it's a bit of a double whammy, and management will need to find the balance between resolving ongoing lawsuits quickly and limiting the financial harm of those suits.

The two most important lawsuits are a class action regarding the Chinese-made laminate, and a battle with a group of the company's insurers which are claiming they don't have to pay the company's legal costs resulting from those products. Yes, the agreement with CPSC and a recent agreement with the California Air Resources Board (CARB) will help undermine the consumer class action to some degree, and potentially the suit with insurers. But until there's a settlement or a judgement, there's risk that shouldn't be ignored.

The good news is the company has some financial cushion. At the end of the most recent quarter, Lumber Liquidators reported it had $22 million in cash, and $61.6 million available on its revolving credit; if sales can hold steady, operating cash flows should be enough to sustain the business.

The bottom line: Today's a good day for Lumber Liquidators and its shareholders. The combined results of the CARB and CPSC investigations largely support what the company has said all along. Nonetheless, there are still hurdles ahead. A turnaround could be around the corner, but it's too early to call it just yet.