Stocks fell last week as the Federal Reserve reset expectations on the pace of interest-rate hikes over the coming months. The Dow Jones Industrial Average (DJINDICES:^DJI) and the S&P 500 (SNPINDEX:^GSPC) each gave up 1% during the past five trading days. Yet indexes remain in positive territory for the year -- up by about 1.5%: 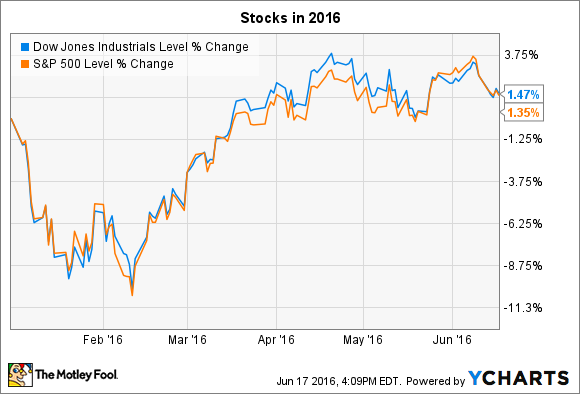 The biggest economic news of the coming week will likely be Thursday's referendum on whether or not the U.K. will remain a part of the European Union. Polls show a close race, and a vote to exit the monetary union might spark volatile stock trading late in the week.

Meanwhile, FedEx (NYSE:FDX),  CarMax (NYSE:KMX), and Winnebago (NYSE:WGO) could make big moves as they are set to report quarterly results over the next few trading days.

Delivery giant FedEx closes out its fiscal year with an earnings announcement on Tuesday. The stock has beat the market this year, as cost cuts and lower fuel prices are sending profits higher. Investors are looking for more good news this week: Consensus estimates call for a 24% EPS jump, to $3.29 per share. 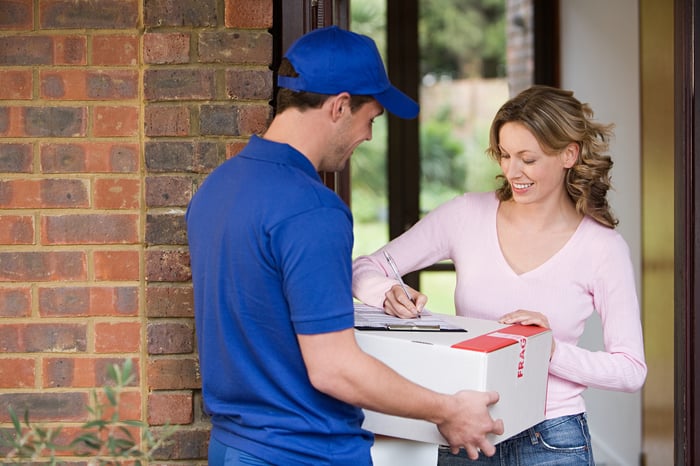 Shareholders should be watching for signs that the ground-delivery segment has returned to healthy profitability after peak holiday-season volumes pushed margins down last quarter. Look for updates on how the integration with its recent European delivery-network acquisition is going, as well.

Finally, Chief Financial Officer Alan Graf told investors three months ago that the company expects "solid growth in earnings and cash flow" in fiscal 2017. Investors might get some hard numbers to back up that optimism on Tuesday.

CarMax, the largest retailer of used cars in the country, posts earnings results on Tuesday, and has Wall Street on edge. The stock is down by one-third over the last year as a spiking new-car market has put pressure on profitability, and contributed to lower customer traffic in each of the last two quarters.

CarMax's management thinks those concerns are overblown, and they point to rising sales-volume numbers to show that their approach is working. The company processes 340 car sales per month, which is bigger than their next four competitors combined. "I think the results speak for themselves," CEO Tom Folliard told investors in April.

Looking ahead, growth will be powered by an expanding store base that seeks to cover more than the 65% of the population that's currently served by CarMax. The company is also plowing investments into upgrading its mobile apps and websites, because more than half of its in-store traffic begins its CarMax experience from an online source.

Consensus estimates call for recreational-vehicle specialist Winnebago to post minor sales and profit growth on Wednesday. At its last quarterly update, the company managed an uptick in profitability that was overshadowed by shrinking RV sales volumes.

In that context, Winnebago's new CEO Michael Happe is going back to the basics by focusing on raising production quality and design standards to fund more sustainable growth. The company aims to ensure that its manufacturing facilities are "delivering the industry's highest level of product quality while working to create sustainable, increased levels of manufacturing output," he told investors in March.

Longer term, executives are optimistic that Winnebago's new products will turn the tide, and begin clawing back that lost market share. Investors will be watching for evidence of that recovery over the next few quarters which should show up in improving RV volume figures.