During the last decade, the S&P 500 index has gained a grand total of 63%. That long road passed over the market meltdown in 2008, making for a bumpy trip.

These modest returns aside, many stocks delivered fantastic gains during the same period. Let me show you a group of technology and consumer-goods tickers that delivered at least 20-fold returns in the last 10 years, turning an original investment of just $8,000 into more than $195,000 along the way.

My list includes travel deals portal Priceline Group (NASDAQ:BKNG), insurance software specialist Ebix (NASDAQ:EBIX), and digital video pioneer Netflix (NASDAQ:NFLX). What did these wildly varied growth stories have in common, and how can you find the next 2,000% gainer? Let me give you some pointers. 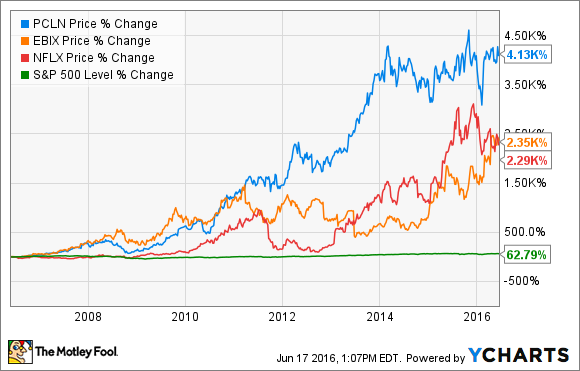 The biggest winners here could have been even larger. Priceline shares rose 4,160% higher thanks to deep-rooted hotel relationships, smart acquisitions, and an early start on travel sales through mobile devices. At the same time, the company printed out a huge number of new shares to finance some of its larger buyouts, raising total share counts by 24%. Backing out that effect, Priceline's market cap soared 5,200% higher.

Eight thousand dollars invested in Priceline in the summer of 2006 would be worth $340,800 today. Without the heavy share dilution, investors could have enjoyed a $424,000 holding instead.

The company found a niche in low-cost travel arrangements, exploited it to the hilt with the help of smart partnerships and memorable marketing, and rewarded shareholders richly. And those additional shares helped Priceline carry out its acquisition strategy, so the dilution was more than just empty pain.

Like Priceline, Ebix also printed tons of new shares to finance a range of game-changing acquisitions. The share count has increased by 32% during the last decade, which slowed down shareholder returns from 3,230% to 2,420%.

That's still a wealth-building 25-bagger, turning an $8,000 investment into $202,000. If the insurance-tools specialist could have financed its series of strategic buyouts with pure cash, we'd be looking at a take-home payout of $266,000 instead. Either way, Ebix has made its long-term investors rich.

Also much like Priceline, Ebix identified a unique market niche, and then built a dominant market presence there. Often competing with companies many times larger, Ebix established itself as the leader in complex insurance systems. Even so, Ebix's modest $1.5 billion market cap, and just $273 million in trailing revenue, leaves plenty of room for future growth. It's still a hungry growth stock.

Netflix took a different approach to this burst of hyper growth. Having cornered the market for mail-order DVD rentals in the mid-2000s, Netflix switched gears to digital streaming, and created a whole new market.

Today, DVDs are a fading afterthought on Netflix's income statements. The streaming service covers the globe, dominates the domestic digital-video rentals sector, and serves as the launching platform for a metric truckload of Netflix original series.

Sales are soaring, but the content-production costs have plunged earnings and cash flows deep into the red ink. Management expects to reverse that equation in 2017 and beyond, but many investors are skeptical. Netflix share prices have fallen 17% so far in 2016.

Even so, investors like yours truly have enjoyed a 2,340% return over the last 10 years. Eight thousand dollars invested in mid-2006 would now be worth $195,000. Unlike Ebix and Priceline, Netflix has not built its growth on acquisitions -- in fact, the company has never bought another business of any size.

What did these three future growth stories have in common 10 years ago? Quite simply, all three were led by visionaries with solid long-term plans.

The progress wasn't always smooth. Netflix CEO Reed Hastings misjudged how quickly he could get away from the DVD business in 2011, leading to the Qwikster debacle and angry shareholders. Ebix pedaled backward between 2011 and 2014, but more than doubled in 2015 as its buyouts started paying off. And Priceline battled rising competition in 2012 -- by acquiring another one of its smaller rivals, of course.

The key name at Priceline was former Chairman Ralph Bahna, who brought experience from the cruise, hotel, and airline industries to this role. Under his guidance from April 8, 2004, to Dec 31, 2012, Priceline shares rose 2,150% in just nine years as his acquisitions-and-partnerships strategy took root.

And the Ebix story has always resonated with the larger-than-life presence of CEO and Chairman Robin Raina. Having rescued a failing business 16 years ago, Rainia pointed Ebix toward the singular goal of becoming a part of every insurance transaction, everywhere. That journey is still ongoing, and Raina is happy to sell his tools via white-box partnerships if that's what it takes. It's all about building a ubiquitous presence, with or without the actual Ebix brand.

Negative notches on their stock charts didn't distract from the larger targets, and all three companies bounced back with a vengeance.

That's the kind of gumption you want to see in today's small caps as they navigate rough waters toward a clearly defined goal in the distance. Build a digital-streaming business just as soon as consumer broadband connections can handle that task. Ride the "name your own price" tag line, and buy innovative rivals as they pop up. Forget about expanding into new markets and double down on your insurance-flavored field of expertise at every turn.

Granted, these visionary qualities may not always be obvious. For example, I noticed Netflix's extremely long-term goals when doing a deep dive into the old-school video rental market in 2006. I've spent the next decade immersed in the Netflix model, sometimes wondering why the company's qualities aren't blindingly obvious to other investors. But if it were that easy, stocks would never be undervalued in the first place and there'd be no advantage in figuring out what a company's executives and board members are planning.

In short, winning companies must be the best at what they do, even if they have to create that market from scratch. And it's up to us investors to find those long-term visionaries, by gumshoe leather or our own deep industry knowledge.