If there's one thing that could cause bank stocks to rally, it would be higher interest rates. As we learned this week, however, bankers and bank investors will have to wait longer than previously expected for that to happen.

Federal Reserve chairwoman Janet Yellen implied in Congressional testimony on Tuesday that interest rates could stay depressed for years to come. Her comments marked a subtle change of course for the Fed, which had been intimating for much of the past year that it was on the verge of raising rates in response to falling unemployment and rising output.

The Fed operates according to a dual mandate, tasked with minimizing unemployment and inflation. Although doing so is more of an art than a science, the central bank had previously set targets for both -- a 5% unemployment rate and 2% inflation. Once these targets are achieved, the Fed would presumably feel comfortable raising interest rates, which would act to suppress economic growth. 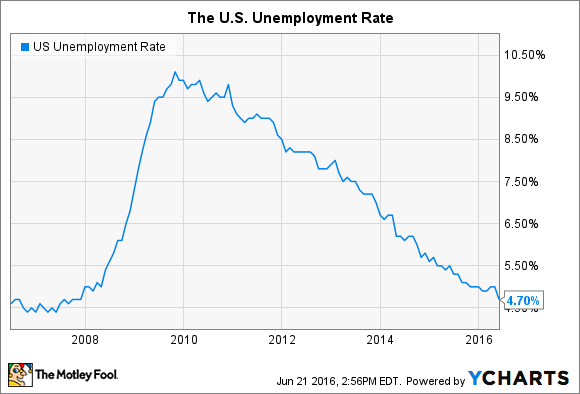 When the unemployment rate reached the 5% mark last October, after peaking at 10% in 2009, it seemed as if higher interest rates were in order. And that's exactly what happened. At the Fed's meeting in December, it increased the Fed Funds rate by 0.25% -- this is the rate banks charge each other to borrow excess reserves on an overnight basis.

As the Federal Open Market Committee noted at the time:

The Committee judges that there has been considerable improvement in labor market conditions this year, and it is reasonably confident that inflation will rise, over the medium term, to its 2 percent objective. Given the economic outlook, and recognizing the time it takes for policy actions to affect future economic outcomes, the Committee decided to raise the target range for the federal funds rate to 1/4 to 1/2 percent.

The move led analysts and commentators to expect that more increases were right around the corner. "The Fed is thinking seriously about raising its benchmark interest rate at its next meeting, in June," wrote The New York Times' Binyamin Appelbaum last month. Appelbaum's opinion was well founded, as the Fed noted at its April meeting that "it likely would be appropriate" to raise rates in June if the economy continued to rebound.

However, these plans have now been placed on hold. Yellen said on Tuesday that "the pace of improvement in the labor market appears to have slowed more recently." She was referring to the latest jobs report, which showed that the pace of hiring in the United States fell to a more than five-year low last month. On top of this, while the unemployment rate declined to 4.7% in May, the drop had less to do with job creation than with people falling out of the labor force.

Yellen went on to list a number of additional concerns, including uneven economic growth, vulnerabilities in the global economy, slowing growth in China, "surprisingly weak" business investment, and an inflation rate that's still only half of the Fed's 2% target. The net result, said Yellen, is that "the federal funds rate is likely to remain, for some time, below the levels that are expected to prevail in the longer run." 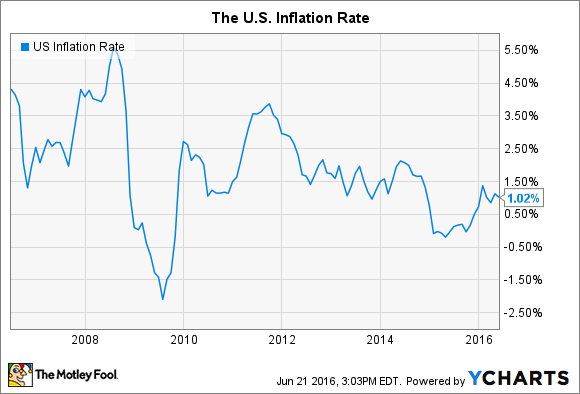 This is bad news for banks, which having been waiting with bated breath for rates to rise. Bank of America (BAC -4.46%) is first and foremost among these. If short- and long-term interest rates rise by only 100 basis points, or 1%, the North Carolina-based bank would earn $6 billion more in net interest income. The magnitude of the earnings gain makes Bank of America the most asset-sensitive bank in its peer group. Without the increase, there's little hope Bank of America can generate the 12% return on equity needed for it to create value for its shareholders.

While Bank of America stands to benefit the most from higher rates among the nation's biggest banks, it's far from alone. JPMorgan Chase (JPM -2.80%) estimates that an identical 100-basis-point increase in rates would boost its net interest income by $3.1 billion. And if short- and long-term rates rose by 200 basis points, JPMorgan Chase would earn $5.1 billion more in annual net interest income. The "benefit to rising rates on U.S. dollar assets and liabilities is largely a result of reinvesting at higher yields and assets repricing at a faster pace than deposits," JPMorgan Chase explained in its latest quarterly report.

Wells Fargo (WFC -4.96%) is in the same position, though it's already begun to position its balance sheet in anticipation of rates staying lower for longer. "We're preparing ourselves for a long march at the longer end of the curve," Wells Fargo's CFO said on the bank's second-quarter conference call last July. Wells Fargo's CEO John Stumpf reiterated this point in an interview with the Financial Times earlier this month:

Bank investors will have to remain patient -- particularly shareholders of Bank of America, which continues to trade for well below its tangible book value. There will come a time when this will change, but that time doesn't appear to be coming anytime soon.

Consumer Spending Is Strong, but What Does It Mean for the Economy?
366%