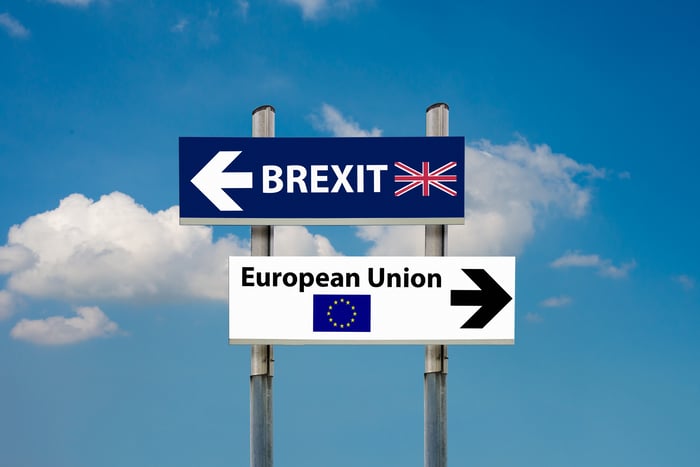 Following six days of losses in seven trading days, U.S. stocks have now managed to put together two straight days of gains this week, with the benchmark S&P 500 (SNPINDEX:^GSPC) and the Dow Jones Industrial Average (DJINDICES:^DJI) (DJINDICES: $INDU) closing up 0.27% and 0.14%, respectively, on Tuesday.

Why financial markets are getting "Brexit" wrong

[Brexit -- the UK choosing to leave the European Union] is not going to happen. Look at what happened with [the 2014 referendum concerning the independence of] Scotland. People aren't going to pull a lever for Brexit, so I don't even think that's worth considering in the present time.

Remember all the tail risk insurance that pension plans put on in 2009? What a waste of money ... The odds are less than what people have embedded into their protection so it's likely to lose money.

At the time, the Economist's poll-tracker was showing the "Remain" vote at 42%, "Leave" at 37%, with 16% "Don't knows." Given the level of uncertainty those numbers suggest, and with two months until the referendum, it's rather odd Gundlach would make a such a categorical statement. (But then, no one ever accused star fund managers of lacking confidence in their judgement. Furthermore, it isn't necessarily irrational to pay for overpriced insurance.)

The uncertainty surrounding the outcome of Thursday's referendum on Brexit remains massive: Yesterday's figures from the same poll tracker showed "Remain" ahead of "Leave" for the first time in a month, at 44% versus 43%, with a whopping 11% still saying they don't know.

With all due respect to Gundlach, who is one of the more interesting people in finance -- and certainly one of the most successful -- his certainty appears to be symptomatic of the intellectual chains that bind many professional investors' thinking.

For example, in elite business and financial circles, there is near-perfect unanimity around the idea that Brexit would be economically harmful to the U.K. and the European Union. The list of official institutions, business leaders, and investors who have publicly affirmed that idea in the run-up to the referendum is a veritable who's who of the great and the good: the International Monetary Fund, the European Central Bank, JPMorgan Chase & Co. CEO Jamie Dimon, U.S. Treasury Secretary Jack Lew, and George Soros, to name a few.

I don't disagree with them, but I strongly question the notion that U.K. citizens will be voting on Thursday strictly on the basis of economics. Unfortunately, most professional investors think of themselves as members of a fictional species, the hyper-rational homo economicus, and when faced with a situation like this, they'd like to believe everyone else does, too. But that simply isn't the case.

Will the U.K. vote to remain in the European Union? I think it's more likely than not. Am I highly confident in that observation? No. Is the risk that the U.K. votes to secede significant? The numbers suggest to me that it is very significant. Will we know what the ex-ante probability was once the outcome of the vote is known? No, and that's just part of what makes the financial markets so fascinating.

When cash is very high, it's because of fear. When it's very low, it's because of greed. Generally, you want to buy fear and sell greed. All other things being equal, this is a risk-on signal. -- Michael Hartnett, chief investment strategist at Bank of America Merrill Lynch

B of A Merrill Lynch's monthly fund manager survey shows that institutional investors lifted the cash component in their portfolios to an average 5.7% of their assets in cash in June -- the highest recorded level since November 2001: 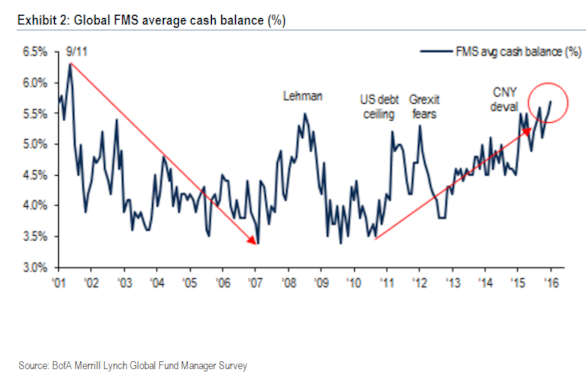 Incidentally, as was the case in last month's survey, investors identified "Brexit" as the "biggest tail risk" for the world economy.