When it comes to dividend-paying bank stocks, it's hard to beat Wells Fargo (NYSE:WFC). Shares of the nation's third biggest bank by assets yield 3.3%, and it has boosted its quarterly payout every year since 2011. One downside to doing so, however, is that Wells Fargo is now bumping up against limits set by the Federal Reserve that dictate how much of a bank's net income can be distributed to shareholders.

Banks can't just raise their dividends willy-nilly. Thanks to regulations passed since the financial crisis, they now must get approval from the Fed before doing so. This happens once a year during the annual stress tests, which consist of two parts:

This hasn't been a problem for Wells Fargo, as is obvious when you consider that it's been approved to boost its dividend in all of the past tests. But the difference this year is that it's now up against two barriers. 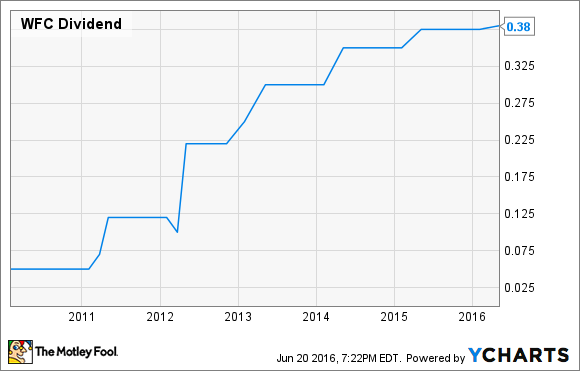 The first is a so-called "soft cap" on dividend payout ratios above 30%. As the Fed explains in the instructions to this year's comprehensive capital analysis and review -- i.e., the second stage in the annual stress test:

The Fed hasn't committed the second threshold to paper, though analysts believe that a "hard cap" exists at a 40% payout ratio. CLSA analyst Mike Mayo alluded to this in a report issued this week, laying out his predictions for how banks will perform on this year's test.

This matters to Wells Fargo because its payout ratio last year was 34.5% -- calculated by dividing its cash dividends paid on common stock by its net income applicable to common shareholders. This is obviously above the 30% soft cap, but still comfortably below the 40% hard cap.

This doesn't mean that Well Fargo won't be able to increase its dividend this year. After all, the Fed allowed it to do so in 2015 even though its payout ratio was 31.7%. On top of this, it seems likely that Wells Fargo will be able to meet the Fed's "particularly close scrutiny" of the strength and stability of its earnings. Wells Fargo is the most profitable multitrillion dollar bank in the country, and also the most consistent when it comes to steadily growing its bottom line.

That being said, this year's stress test is particularly severe. Not only does its worst-case scenario assume a more stringent economic environment than the financial crisis, but it also requires banks to factor in negative interest rates -- something they've never encountered in the United States. Thus, if there ever was a year that the country's best-run banks could face problems, this would be it.

I don't anticipate that being the case. Neither does Mayo, who believes that Wells Fargo will get approval to raise its dividend by 6%. However, given Wells Fargo's already substantial payout ratio, investors should temper their expectations about the size of an expected boost.