Shares of Advanced Micro Devices (NASDAQ:AMD) have surged far this year, up nearly 80% year to date. AMD has struggled in recent years, with a slumping PC market and share losses to both Intel (NASDAQ:INTC) and NVIDIA (NASDAQ:NVDA). That struggle continues, but optimism about new products has driven the stock price to its highest level since 2012. 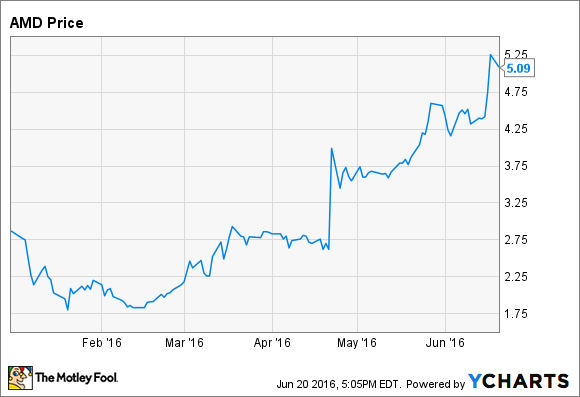 This kind of optimism can be dangerous, especially given AMD's history of failing to deliver on its promises. Here are three reasons AMD stock might give up its gains.

The bet on mainstream graphics could fail

AMD recently revealed three graphics cards based on its Polaris graphics architecture. All three cards will focus on the mainstream portion of the graphics card market, with the RX 480, the only card with a firm launch date and price, set to become available on June 29 priced at just $199. The RX 470 and RX 460 will be lower-end cards, but few details have been disclosed.

NVIDIA, AMD's only competitor in the graphics card market, is focusing on the high end. The company announced the GTX 1070 and GTX 1080 in May, priced at $379 and $599, respectively, and based on NVIDIA's Pascal graphics architecture. Both Pascal and Polaris bring major improvements in performance and efficiency.

NVIDIA's unit share of the graphics card market stands at about 80%, up from 60% in early 2014. AMD's bet on the mainstream is an attempt to win back some of that lost market share, and I think the company has a good chance of doing just that. But NVIDIA will almost certainly be launching mainstream Pascal cards in the coming months, and there's no reason to believe they won't be competitive with AMD's products. If AMD doesn't produce the kind of market share gains investors seem to be expecting, the stock could lose some of its recent luster.

Zen has a lot to prove

Toward the end of this year, AMD is expected to launch new PC processors based on Zen, the company's upcoming microarchitecture. Zen is supposed to fix the major performance problems that plagued the previous generation of AMD CPUs and made it impossible to compete effectively with Intel. AMD has said  Zen will bring a 40% improvement in instructions-per-clock, a measure of single-threaded performance, compared to the previous generation of CPUs.

Next year, AMD will launch server variants of Zen as the company begins its assault on Intel's near-monopoly in the server chip market. While the PC market is shrinking, server chip sales are benefiting from the continued build-out of cloud data centers. Intel's data center segment produced nearly as much operating profit as its client computing segment last year.

The good news for AMD is that Zen will be built on a 14nm process, and Intel won't be moving to 10nm until sometime in 2017, following the company's abandonment of its tick-tock strategy. The manufacturing gap between the two companies will be narrower than it's been in years. It's the perfect time for AMD to launch competitive chips.

There are a couple of things that could go wrong for AMD. Zen could fail to live up to expectations -- it wouldn't be the first time AMD over-promised and under-delivered. And Zen could still be delayed. If either of those scenarios play out, the turnaround story would be in jeopardy, and shares of AMD could tumble.

Expectations may be too high

Even if both Polaris and Zen are viewed as successes for AMD, an 80% increase in the stock price in just a few short months may be a case of expectations getting out of hand. AMD is still very unprofitable, posting a $589 million net loss over the past 12 months on $3.8 billion of revenue. Margins have a lot of room to improve, but the hole AMD finds itself in is deep.

In the company's best year over the past decade, which was 2010, net income was just shy of $500 million. Historically, the company's profitability has fluctuated wildly, especially since 2000. On average, AMD hasn't produced much of a profit at all. 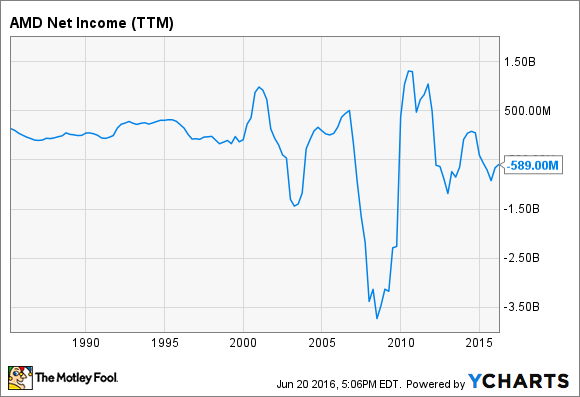 With a current market capitalization of around $4 billion, buying AMD at this price requires the belief that AMD is not only going to surge back to profitability, but that the company is going to be fundamentally different than it has been in the past. The stock price may have gotten out ahead of what AMD can realistically accomplish, and any bad news at all could send shares lower.