Chevron (NYSE:CVX) has been a little slow to respond to the decline in oil and gas prices. In some ways, it hasn't been able to, because it had so much capital spending tied up in large projects not yet producing. As more and more of those facilities come online, though, the company is gaining some more flexibility on what to do from here. Cutting costs is a large part of Chevron's current strategy, but it isn't the only thing that management is looking at.

To get a better idea of where Chevron goes from here, let's take a look at several management quotes from its most recent conference call. The five below give a pretty good picture as to what Chevron's management is thinking.

A big lesson oil and gas producers have -- hopefully -- learned from this big disruption of the energy market is that there is an immense value in being flexible. The larger oil and gas companies like Chevron were too focused on megaprojects that can take decades to develop. This downturn left them with their pants down as cash flows from operations dried up and bills for projects were still coming due. Here's how Chevron is dealing with this, according to CFO Patricia Yarrington:

Our investment will shift to a higher proportion of short-cycle projects. Not only are many of these brownfield opportunities, but they will give us greater capital flexibility going forward to help limit further debt increases.

The way Chevron plans to do this is by shifting to shale oil and gas production. It takes much lower upfront capital before a well comes online, and the short development cycle means capital spending can fluctuate rather quickly. Chevron expects to increase its capital spending on its current production base and short-cycle investments like shale from 40% in 2015 to 65% by 2018.

Despite this strategy shift, there is a bit of a hangover from the company's megaproject spending and the downturn in oil prices. To get back to profitability and fill the funding gaps, Chevron has been rather aggressive about asset sales. It appears that this trend isn't stopping any time soon. Yarrington went into a little more detail into the company's planned asset sales over the next couple of years:

Over the next two years, we are targeting $5 billion to $10 billion in sales proceeds. The assets targeted for sale are marketable, and we believe the prospective transactions are executable as well. ... Just last week, we reached an agreement to sell our assets in Hawaii. The sale includes the 58,000 barrel per day refinery, interest in a 58-site branded service station network, four product distribution terminals, pipeline systems and other downstream-related assets. This transaction is subject to regulatory approval and is expected to be completed in the second half of 2016.

In addition, we are soliciting interest to sell our 75% shareholding in South Africa downstream. We are also exploring potential interest in our geothermal business and Myanmar upstream assets.

In aggregate, while it's always difficult to be precise about specific timing, we currently have line of sight on around $2 billion in proceeds, maybe a little higher for 2016.

The one thing that is slightly concerning about these announced deals is that so much of them are concentrated on the downstream side -- refineries, pipelines, retail, etc. Even before these proposed sales, Chevron was the most production-oriented of the large integrated oil and gas companies. Shedding these assets will only make it more exposed to the ups and downs of the oil market.

Can it raise the dividend?

Chevron and ExxonMobil (NYSE:XOM) are the only two integrated oil and gas companies that qualify as dividend aristocrats. With cash flows looking tighter than ever, though, Chevron's ability to raise its dividend is looking a little precarious. In response to a question about a potential dividend raise, this is what Yarrington had to say:

I think going forward, the timing will obviously be dependent upon future cash, future earnings, what happens to price, what happens to our project ramp-ups, how all that plays out in future quarters. We'll also have to take a look at what we think is happening to commodity prices over a longer sweep of time because, again, we're looking at a dividend as being essentially a commitment in perpetuity. We're very aware of our 28-year record of consecutive annual per share payment increases, and that will be taken into account. So the board will take all this into account as it looks at dividends each and every quarter.

That's a pretty complex way of saying "we're going to try our damnedest to keep the dividend streak alive." With so many investors basing their investment on the idea that Chevron will keep raising its dividend, it would be hard for the company to not continue to do so. Chances are, Chevron's management and board will decide on a token raise to keep its dividend streak alive, but don't expect a big raise that would further compromise its cash flows.

Shale is the solution for now

Continuing with the statements that Yarrington made about the need for shorter-cycle investments like shale, Joseph Geagea, the executive vice president of technology, projects, and services, highlighted Chevron's potential as a shale producer. Notably, he focused on the advantages the company has over many other companies in the Permian Basin.

The key for us is to really exercise the things within our control, and that is to continue to drive cost down and to improve our efficiencies. And we have given several proof points in the past about how much progress we've done in that regard. We're now in full horizontal factory mode in the Permian. We brought our well cost down by about 40%, and we have about 4,000 well locations that offer us a 10% rate of return at around $50 WTI. And when you add on top of all of that the royalty advantage that have, we see our activity in the Permian as being very, very strong.

Unlike many newer independent oil and gas producers that had to sign lease agreements with landowners to pay royalties, Chevron was already sitting on large tracts of land from legacy production that can be developed for its shale rock. This is how the company is able to generate decent rates of return at a lower cost of oil. Whether this kind of performance can be replicated in other basins is questionable since the Permian position enjoys the benefits of infrastructure and no royalty rights, but Permian will be a good place to get production while oil prices are extremely low.

Any more appetite for debt?

Debt has been one of the saving graces for Chevron and many others during this downturn, and as Chevron has highlighted in some of its recent investor presentations, both it and ExxonMobil hold a huge advantage over many of its peers in terms of balance sheet strength. 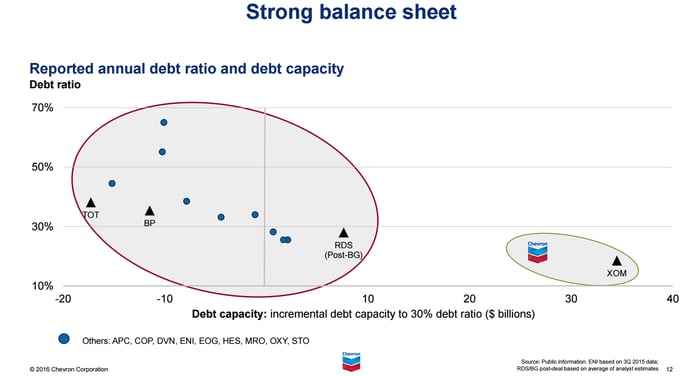 At the same time, though, the company's asset sales and capital spending cuts probably won't be enough to cover its cash needs until 2017, by managements estimates. That means Chevron will probably need to tap the debt market some more in the interim to meet its cash needs. While some analysts were curious if management was getting a little nervous about this, Yarrington pointed out that the company still has a little more appetite if necessary:

The way I look at this and the way we look at this really is that, obviously, when you're at the peak of a price cycle, that's when you want to have restored your balance sheet, have an ultraconservative balance sheet and that allows you to come through a price downturn. Right now, we're sitting at a 22% debt ratio. We showed a slide at the Security Analyst Meeting that said we could take somewhere between $25 billion to $30 billion of incremental debt that would take us up to about a 30% debt ratio. ... But I would see as you go through the lows of a price cycle, you would expect your debt burden to increase into the 30%-ish range, maybe a little bit higher on a temporary basis. But if you look through the whole cycle, I think a good place for a company like Chevron with the projects that we take on, our size, our scale, our scope would be probably in the low 20s through the cycle. But getting into the 30%-ish range, we could handle that if it's temporary.

As much as debt can be a burden, the way that Yarrington has explained it here is a pretty good read on the situation. The problem with it, though, is knowing when a company is at the top of the cycle. A long period of high prices could be all it takes for companies to act a little cavalier with debt.

There was a lot to digest from Chevron's recent conference call, but the overarching theme is that the company is making a large push into short-development-cycle investments like shale drilling and is using any means possible to plug the funding gaps in the next couple of years.

Probably the most important thing for investors to watch in the long term is that debt situation. Sure, the company probably does have the strength to take on a bit more debt in the interim to cover cash needs, but once oil prices are in a better place, we will want to see that debt level get reduced significantly so the company can get ready for the next downturn, whenever it happens.