What’s got the stocks of two of the world’s biggest automakers so cheap, and why investors might want to be interested.

Ford (F -2.46%) and General Motors (GM -1.59%) are both trading at notably low valuations compared to their price-to-earnings ratios. In this clip from the Industry Focus podcast, Motley Fool analysts Sean O'Reilly and John Rosevear take a look at why that is.

Sean O'Reilly: You look at the valuations on Ford and GM, and you're just like, "What is going on here?" The multiple on the market's 18 or 20 and you've got Ford with a P/E of 6? Why are these so cheap by any reasonable measure?

John Rosevear: There are a few explanations. First of all is, these are big, old-school cyclical industrial stocks. It's not an uncommon pattern if you look way back in history that they cruise around a price-to-earnings ratio of 10. But then, profits start to rise as the auto market moves toward a peak, and the P/Es shrink. The reason they shrink is because investors start to say, "Wait a minute, if the market is peaking, that means profits are going to start to shrink in time." That's just how they've always behaved.

There's a certain amount of that going on right now, but these are really low. GM's P/E right now, trailing-12-month basis, is 4.3 or something. It's really low. It's nowhere near 10. You look at the Wall Street estimates for earnings and they're good. They'll be up this year. They'll be up more next year if the estimates follow through. They had a good year last year, earned just over $5 a share, which is very good for GM, well over $10 billion before taxes.

There's strong businesses. We're way past bankruptcy. We're way past the economic crisis. Both companies have very strong management teams. Ford especially, you can say this company is battle-tested. These guys all went through the near-death experience. They all worked closely with Alan Mulally -- Mark Fields, CEO, was Alan Mulally's right-hand guy for several years. He was really the architect of the turnaround. Ford is trading at about six times earnings. With this crack management team, with very good sales in the U.S., with promising things going on overseas, what is the story? I think a certain amount of the story is just the cycle.

The market for new light vehicles -- light vehicles is our technical term for cars, pickup trucks, and SUVs, thrown together. Basically, things people buy to own and drive in their garage, versus big trucks. We have a chart. I don't know if the readers will be able to see it. We have a chart that Sean and I have been looking at today.

O'Reilly: If you want the chart, we'll email it to you. Email us at industryfocus@fool.com. All right. Sorry, John. 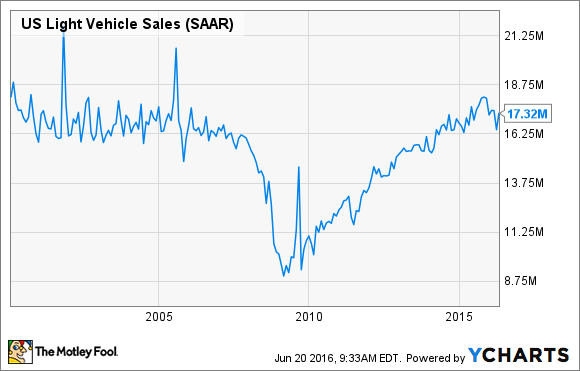 Rosevear: Briefly, we can tell you what the summary of the chart is. The pace of auto sales, which is measured with a monthly number, is very close to the all-time highs that were set last decade during the great SUV boom, 2005-2006, when...

O'Reilly: Everybody had an Escalade. Say it.

Rosevear: Everybody had an Escalade. The margins on these things were fat. Toyota was trying to figure out how to make SUVs, and all these things. Then, of course, as we know, the market turned. Gas prices went up. SUV sales stalled. The economic crisis happens. GM and Chrysler crashed in a bankruptcy court and all that. But before that, the pace of auto sales in the U.S. was extremely strong. We're close now to that pace. That makes analysts think, "Huh, maybe there's not a lot of growth left here." Profits may not drop for a while. They could cruise at this level for a few years. But growth may be hard to come by. Of course, as investors, we want growth.

We should back up a second and say the U.S. market is really, really important here. Ford and GM are both global companies. If you go to Shanghai, you'll see Fords and Buicks and Chevys on the street. Likewise in Latin America, likewise in Europe, all over the world. But the U.S., from a profit perspective, is of outsize importance.

For Ford, North America accounted for 61% of its total global revenue last year and 86% of its pre-tax profits.

O'Reilly: Correct me if I'm wrong: That's because Ford's real moneymaker is trucks. There's nothing Americans love more than a Ford F-150.

Rosevear: F-Series, you got it -- F-Series, that's what we call it. F-Series is F-150 and the Super Duties. The F-250, F-350, and so forth. We track them as a group. Ford reports results for them as a group. Ford's most important product in the whole world. They sell a ton of Focuses and so forth in China. They sell all sorts of cars in Europe. Pickup trucks, it really comes down to pickup trucks.

The margins on those things are huge. With gas prices moderate as you've been discussing on the podcast for a long time now, truck sales have been terrific. That's also true at GM. GM sells almost as many pickups as Ford. Sometimes more in some months if you add together the Chevys and the GMCs. GM also sells, they really dominate what's left of the big SUV market. Escalade-style SUVs, the industry...

O'Reilly: Was it the other one, the Sierra something or...

Rosevear: The Sierra is the pickup. This is the Chevy Tahoe and Suburban. The GMC Yukon and the Cadillac Escalade, these are big truck-based SUVs. A lot of companies used to make them. A lot of companies used to sell a lot of them. Most of that business has gone away for most of those companies. GM has like three-quarters of the market that's left. Which is so many that they're expanding their factory in Texas that builds these things, because they can't crank out enough right now, believe it or not.

O'Reilly: Did all those sales go to crossovers, would you say?

A trend that's going on separately, and this is also driving big profits for GM and Ford in North America, is people are giving up cars for crossovers. People are trading in the Ford Fusion for a Ford Escape or an Explorer or an Edge. Likewise at GM, likewise at really all of the automakers, this has caught some by surprise.

You have companies like Honda, which, for years, the bread-and-butter has been the Accord and the Civic, the smaller sedan and the bigger sedan. The CR-V, their compact crossover, is setting sales records. Meanwhile, it's like the car sales have stalled because people are migrating. This is a global trend. It's happening in China. It's happening in Europe even now, too. The twin to the Buick Encore is a small Opel called the Opel Mokka, which GM sells in Europe -- booming sales, booming sales. This is a small premium crossover. Just everywhere crossover sales are booming. That has also helped profit margins everywhere, because generally speaking you make a little more money on an SUV-shaped vehicle than you do on a sedan-shaped vehicle, especially now when demand is hot.

This has also helped -- there are some questions as to whether, "Oh gas prices will go up and they'll shift back," but this trend was happening when gas was over $3 a gallon. It was already in place by 2012-2013. I think this is a long-term shift, which might mean more competition squeezes margins over time. Right now, everybody is making good money on crossovers. Ford and GM have among the best lineups of crossovers in the business. That's boosting them right now, too.

To back up, why are Ford and GM cheap? One reason is because people are concerned that squeeze is coming, because the market appears to have plateaued.