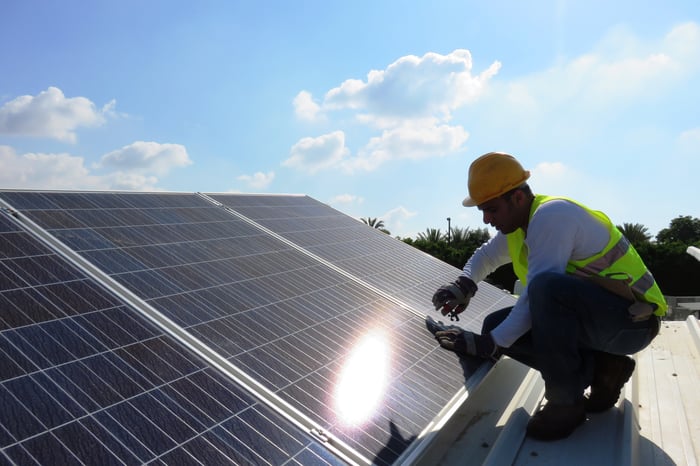 What: If you haven't heard already, Tesla Motors Inc. (NASDAQ:TSLA) officially made an offer to buy SolarCity Corp. (NASDAQ:SCTY.DL) after the market closed on Tuesday. Shares of SolarCity jumped as much as 12.3% in early trading, and Tesla Motors fell as much as 9.8% Wednesday morning after being down double digits in aftermarket trading yesterday. Shares settled with a 7.3% gain and 9% loss, respectively, as of 12:15 p.m. EDT.

So what: What we know is that Tesla Motors is offering 0.122 to 0.131 shares of its stock for each share of SolarCity in a potential merger. Presumably, investors would get a larger number of shares if Tesla's stock falls after this announcement.

Elon Musk has justified the move by saying he'll sell solar energy, energy storage, and cars in Tesla showrooms. The plan is to take clean energy to the masses, all under the Tesla umbrella. Time will tell if that's a successful business model.

Now what: Despite all of the press around this deal today, I don't think this buyout is a done deal. SolarCity investors may see more upside for their shares if the company remains independent than if it undergoes a buyout, especially if Tesla's stock doesn't recover.

Over the next few months the deal will be put to shareholders in both companies. Keep an eye on how that vote goes and if terms are amended because it could determine a lot in both companies' futures given how risky this potential acquisition is.