Oil has rebounded sharply off its bottom, which has fueled a pretty sharp rally in oil stocks. Weaker producers, in particular, have bounded higher and could continue to surge if everything goes according to plan. However, because of their all-or-nothing approach, there is still the risk that these stocks could go bust. Three such stocks we find intriguing are Denbury Resources (NYSE:DNR), Oasis Petroleum (NYSE:OAS), and EXCO Resources (NYSE: XCO). Here is what has us intrigued and why we are content to watch from the sidelines for now.

Tyler Crowe: One stock that has been on my radar for a while that really fits this bill is Denbury Resources. Going into the oil price decline, the company was positioned better than most others. Its primary production came from an enhanced oil recovery technique that injects CO2 into mature reservoirs. Unlike shale drilling, this production method doesn't decline as rapidly and doesn't need as much capital spending to maintain production levels.

The company also had the benefit of a much stronger balance sheet and a suite of futures contracts that allowed it to sell oil at a higher-than-market price for a long time.

The longer this oil price decline has gone on, though, many of those futures contracts have been used up, and management had encountered some struggles to refinance some of its debts. These things had all taken a toll on the company's share price earlier this year. 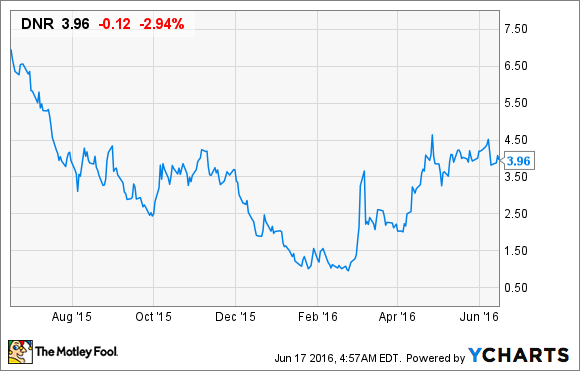 Thanks to a renegotiation of its debt covenants and some modest debt repayments, even the most tepid bankers aren't bracing for the worst with Denbury. Also, oil prices hovering in the $50-a-barrel range helps a lot -- although the company did write some futures contracts that will sell oil for $40 per barrel in the third and fourth quarter.

Compared to a few months ago, Denbury looks to be on even more solid footing, but it's not completely out of the woods yet. Selling oil at today's prices is just enough for the company to break even, and it will take even higher prices before Denbury can start to invest in new sources of both oil and CO2. I'd still keep a close eye on this one, but you may not have to worry about it as much as before.

Matt DiLallo: Before the oil market meltdown, the Bakken shale was one of America's premier horizontal oil plays. It was such an appealing area to drill that Oasis Petroleum went all-in, building up a concentrated acreage position. While that focused position has many benefits, the company's all-or-nothing approach is risky.

Drilling economics is an area of particular concern. While the company's core position delivers break-even economics at $30 oil, much of its acreage needs oil above $45, and in some cases even $55, to break even. That limits its drilling options during a low-oil-price environment.

Contrast this with fellow Bakken peer Continental Resources (NYSE:CLR), which has diversified its asset base to include the STACK/SCOOP plays of Oklahoma. While it too can earn break-even drilling returns at $30 oil in the Bakken, its STACK acreage can deliver drilling returns above 20% at a $30 oil price. Furthermore, the company is targeting to improve its returns to nearly 40% by pushing its drilling costs even lower. By diversifying, Continental Resources has more investment options in a weak oil environment than Oasis does with its all-or-nothing approach.

Still, it is hard to argue with Oasis Petroleum's upside potential. The company has nearly three decades of drilling inventory that is economic at current oil prices, which gives it tremendous upside as oil improves.

Jason Hall: When an oil company announces the formation of "special committees" and starts bandying around terms like "strategic alternatives" in the middle of an oil downturn, it's very likely that company has reached the "all or nothing" stage. And that seems to be the case for EXCO Resources.

The company, which said back in May that it had formed a special committee to "among other things, assess the Company's operating and financial situation and to evaluate, develop and recommend one or more strategic alternatives," is in an unenviable position. Furthermore, it went through a major reshuffling of its board as part of that process, and it remains to be seen whether the result will be a more effective group or not.

But it's not hopeless. Even with nearly $1.4 billion in debt, the company has around $300 million in liquidity between cash and available debt, and it's looking very likely that oil and natural gas prices actually did bottom out in the first quarter: 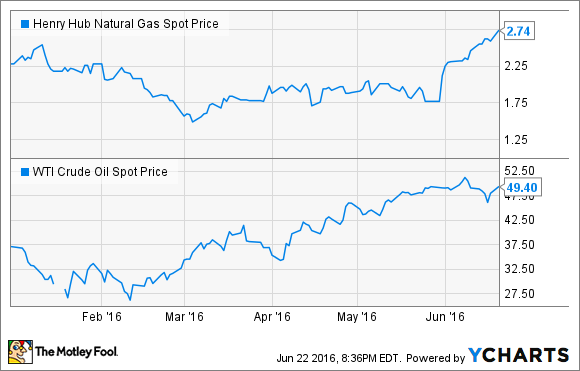 However, seeing a recovery from decade-plus lows isn't the same thing as oil and gas selling for prices that EXCO Resources can operate at profitably. Management must continue to take steps to drive down operating costs, or another drop in prices could spell game over.

If they can keep driving costs down, or if oil and gas prices were to continue climbing (or more likely some combination of both), EXCO Resources could get through the downturn and thrive on the other side. For now, it's on my watchlist, but there's still work for it to do before I'd be willing to invest in the company.