With the oil market starting to heal, investors are giving oil stocks a closer look. That said, after being burned in the past, many investors are focusing their search on the relative safety of big oil behemoths such as ExxonMobil (NYSE:XOM) and ConocoPhillips (NYSE:COP). While an investment in either company is a bet on higher oil prices in the future, the decision to buy one over the other boils down to an investor's understanding of the difference between the two operating models. For that, we asked two of our top oil writers to explain what would make one a better buy over the other.

Stick with what works

Tyler Crowe: One thing that this long downturn in oil and gas prices has shown us is that there is immense value in having assets that handle every aspect of the value chain. Those assets that were "underperforming" when oil prices were in the $100-a-barrel range became critical sources of cash flow and modest profits such that companies could continue to spend on future development. There was a time that both ConocoPhillips and ExxonMobil would have benefited from this, but ConocoPhillips' decision to spin off everything that didn't involve exploration and production back in 2012 made it much more susceptible to the drop in oil prices that started in 2014. 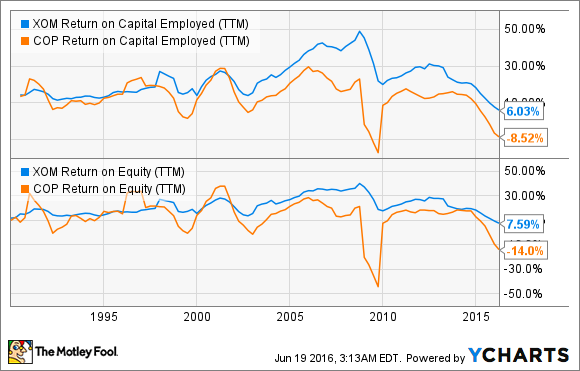 Sure, ConocoPhillips might have more "upside" as oil prices rise, but that is more of a bet on oil prices than it is a long-term investment in a company. Personally, I want to find investments in the energy sector that are built to handle both the ups and downs of the commodity market and generate returns over the long run. This is an arena where ExxonMobil has continually outperformed ConocoPhillips. For more than 30 years, ExxonMobil has been better at allocating capital to high-return projects and producing returns for shareholders. It should be no surprise, then, that ExxonMobil has generated a total return more than double that of ConocoPhillips. 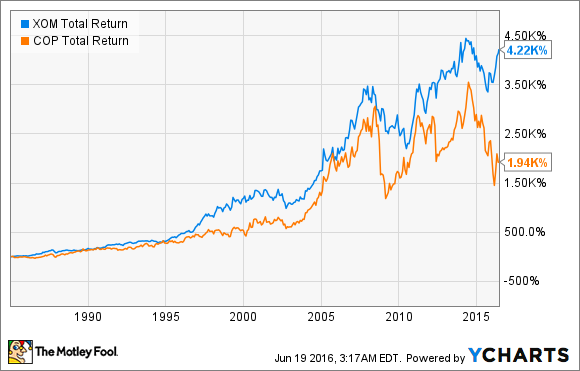 I can absolutely see ConocoPhillips having a decent run over the next year or so as it focuses almost exclusively on developing shale assets in lieu of other types of production. What I'm not certain about, though, is whether this is a strategy that will be successful for five, 10, or 20 years down the road. ExxonMobil's management has a solid reputation of investing in the right assets for the long term and has always had an eye on costs. As long as management continues to do these things effectively, I would much rather buy shares of ExxonMobil today at a slightly discounted price than go bargain-hunting.

An oil stock for the new normal

Matt DiLallo: As Tyler points out, a fundamental difference between ExxonMobil and ConocoPhillips is the latter's focus on shale. It's an approach the company is taking based on its view that there's a new normal in the oil market, which Matt Fox, ConocoPhillips' executive vice president of strategy, exploration, and technology, detailed at an industry conference late last year. Fox summarized the company's view by saying, "We think that in the new world order there's going to be a lot of cycles, shorter cycles than we've seen in the past, and a lot more volatility associated with those cycles."

In management's opinion, the best way to navigate through these volatile periods is to be as flexible as possible. For ConocoPhillips, this means that it has to be able to adjust its spending up or down along with its cash flow. Only shale drilling fits the bill. Because of its short-cycle nature, producers can quickly ramp up investments to rapidly grow production and capture the upside of an improving oil market, while swiftly scaling back when conditions deteriorate.

In other words, ConocoPhillips' long-term strategy is focused on enhancing its flexibility to address the market over the shorter term. That doesn't mean the company will ignore long-term trends nor give up on growing its production over the long haul. Instead, it will cease to pursue growth for the sake of growth, preferring to focus on returns-driven growth. This new approach means growing production on a per-share basis going forward instead of setting an absolute production-growth target.

ConocoPhillips is taking an entirely new approach to the oil market, which could pay off if the market plays out as it expects. It's that upside to both the current market recovery as well as the likelihood of future volatility that makes ConocoPhillips the better buy in my opinion.

We debate, you decide