Disney (NYSE:DIS) has long been a darling in the media industry, with incredibly valuable assets like ESPN, Pixar, Marvel, and Lucasfilm under its control. But the company's stock has floundered over the past year as the most valuable asset -- ESPN -- slips from its perch atop the sports landscape and investors question where the media business is headed next.

ESPN has lost some 7 million subscribers in the last two years and with cord-cutting becoming a bigger phenomenon by the day the trend will likely continue. Despite the drop at ESPN and uncertainty in the media business, Disney has a great resort business that should provide growth for years to come. 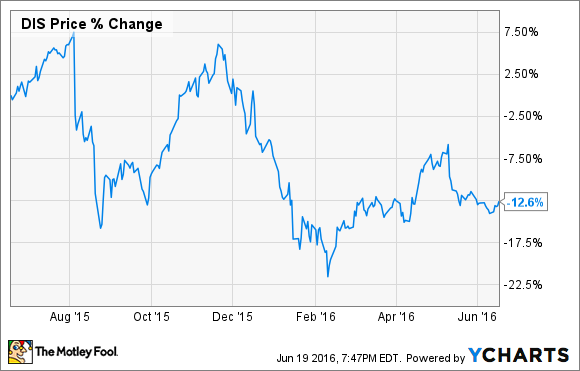 It can be hard to forget that Disney is built on three businesses that create a waterfall of earnings for the long term. The studio business puts out great content that can be sold on media networks and then theme parks capitalize on the popularity in media to attract customers to destinations around the world.

The media network business gets a lot of the attention, mainly because rising cable fees, particularly from ESPN, have driven growth for years. But parks and resorts are a close second in Disney's business and show no signs of slowing down.

This doesn't include the $5.5 billion Shanghai Disneyland that opened last week. Estimates for the new resort show that it could attract as many visitors as Disney World in Orlando, providing revenue streams from management fees, royalties, and its 43% ownership stake in the property.

Theme parks have benefited from a slowly improving global economy as well as the incredible success of Disney's feature films. And that success gives the company new attractions to build and keeps new generations of fans clamoring to visit Disney properties. Now that Disney is in mainland China, it could access a few hundred million more consumers.

A lot of analyses of Disney today focus on the losses in media networks, which is no doubt a negative for the company. But the weakness there could be offset by strength in the studio film business, which then flows to customers being attracted to parks and resorts. And it's this parks and resorts business that's Disney's second biggest moneymaker.

Given the long-term strength Disney has in its business overall, I think shares are attractive at 18 times trailing earnings. I think the company is better positioned than anyone from a studio standpoint, it'll figure out how to monetize network assets as consumers cut the cord, and the parks and resorts business will continue to grow on the strength of the Disney brand. That puts investors in a strong position, even if the short-term outlook for ESPN is more uncertain than some investors would like.