Billionaire investor George Soros' most famous trade involved betting against the U.K.'s pound sterling in 1992. Shorting Britain's currency netted Soros a billion dollars in profit and cemented him atop the investing elite. Now it appears the iconic hedge fund manager has done it again.

Earlier this month, Soros revealed he's betting heavily against markets because of rising economic uncertainty, and earlier this week, he went on record against the U.K. leaving the European Union because of the potential financial fallout. Now that Britons have officially voted for an exit from the EU, or "Brexit," Soros' bearish bets appear to be incredibly savvy once again.

The planet's best prognosticator gets back to business

On June 9, the Wall Street Journal revealed that Soros had emerged from retirement to take a more active role at his multibillion-dollar Soros Fund Management.

Soros' return to day-to-day operations, it was reported, was to capitalize on what he called "opportunities to profit from what he sees as coming economic troubles." Those economic troubles appear to be rearing their ugly heads following this Brexit vote to separate the U.K. from the EU's regulations. Britain's decision begins a multiyear process to unwind itself from decades of EU rule.

How the U.K. will handle this unwinding, and what its impact will be on the country's economy, are questions which bludgeoned global markets on Friday. Taking it hardest were U.K. banks and U.K. currency. The Royal Bank of Scotland Group (NYSE:RBS) plummeted 27%, Lloyds Banking Group (NYSE:LYG) crashed 23%, and Barclays PLC (NYSE:BCS) tumbled 20%. And the pound sterling fell to levels last seen in 1985. 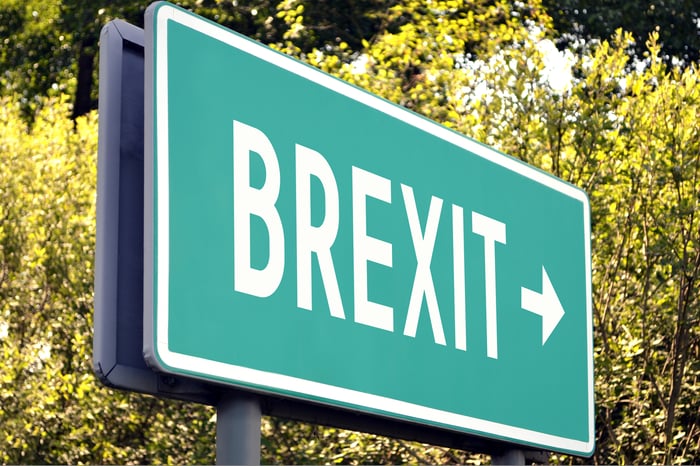 Double-dipping across the pond

Back in 1992, George Soros bet heavily on the U.K.'s attempts to keep the pound sterling above 2.7 German marks. At the time, the U.K. was suffering from inflation that was much higher than Germany's, and Germany was struggling under the weight of unification. In the end, the Bank of England gave up trying to support its currency, resulting in a massive drop in sterling known as Black Wednesday. By betting against the pound, Soros pocketed a billion dollars in profit.

This time around, Soros hasn't said if he's bet against sterling, but he has indicated he's confident markets will drop. Specifically, a June 9 Wall Street Journal article said Soros directed a "series of big, bearish investments."

Soros' pessimism stems in large part from concerns that China will fail to jump-start its economy -- an opinion widely shared by another iconic investor, Jim Rogers, who was once Soros' partner. Soros has also said that an exit by Britain from the EU could prompt "a general exodus, and the disintegration of the European Union will become practically unavoidable."

Given Soros' fears of an EU unraveling, and the fact that Europe is the world's biggest economy, it stands to reason that at least some of Soros' "big, bearish investments" target the region. That line of thinking is supported by his comments earlier this week in The Guardian. In a guest piece appearing on June 21, he wrote that a vote for Brexit would be more damaging to the U.K.'s currency than Black Wednesday was in 1992. Soros based his dire prediction on these points:

Summing up his thoughts, the 60-year investing veteran said "the pound will plummet" if Britons vote for Brexit.

Soros' soothsaying forecast that Brexit would cause a 15% drop in the pound and that it could "possibly fall more than 20%," to below $1.15. Today, the pound is worth about $1.37. If that's still his target for the pound, he probably hasn't covered his bearish bets. Although Soros hasn't said much since the Brexit vote, people might want to listen when he does offer up his thoughts. Clearly, he's proven time and time again that he's worth listening to.