According to a survey by Bankrate, more than half of Americans aren't invested in the stock market at all -- not even through mutual funds in a retirement account, or some other indirect way. Furthermore, less than 14% of people hold any individual stocks at all, and those who do are concentrated in the upper income brackets. Here's why the majority of Americans stay away from the stock market, and why they should change their ways.

They can't afford it (or so they think)

By far, the top reason given for not investing in the stock market is, "I don't have the money." In fact, 53% of people who aren't invested in the market gave this as their primary reason in the Bankrate survey. Not surprisingly, lower-income individuals (those earnings less than $30,000 annually) are most likely to stay out of the market due to a lack of funds.

However, the idea that you need a lot of money to benefit from investing is 100% false. While it's true that it's not practical to create a properly diversified stock portfolio with say, $1,000, there are other ways to put your money to work. You can invest in stock-based mutual funds with as little as $100, or even less.

Consider this: If you set aside just $50 per month to invest (so, $600 per year), it could potentially grow to more than $32,000 after 20 years, based on the stock market's historic returns. After 30 years, you could have nearly $90,000, and after 40 years you could be sitting on a nest egg of more than $230,000. Not bad, considering that if you put $50 per month in a savings account at 1% interest, your 40-year total would be just over $29,000. The point is that although it may seem like you don't have enough money available to make a big impact, you may be surprised at the power of compound returns.

They don't know where to start

Since there's really no personal financial education in American schools, this shouldn't come as much of a surprise. Admittedly, the stock market can be rather intimidating at first, and I wouldn't recommend that anyone just start picking stocks without at least having an idea of what you're doing.

Fortunately, there's a way around this one too. Just like I suggested in the previous section, start out with high-quality mutual funds or ETFs that invest in a broad basket of stocks. Then, pick up some knowledge as you go -- follow the financial news, and learn the principals of picking stocks for the long-term.

Here are a few examples of beginner-oriented articles to get you started:

This is just a small sampling, and you can find plenty of useful investing knowledge in The Motley Fool's Knowledge Center, which has everything from personal finance topics to general investing knowledge to retirement planning advice. Not only will you be better prepared to choose your own stocks, but you'll have built up a portfolio "base" of funds that won't be too susceptible to the performance of any one company.

They don't trust the market

The third most common reason given has to do with a general distrust of the stock market. People either don't trust stockbrokers and other investment professionals, or they simply think stocks are too risky.

First of all, you don't need to deal with a stockbroker or financial advisor if you don't want to. The rise of the online discount brokerage and the information they offer has made it possible to invest effectively without seeking professional help. So, a "distrust of stockbrokers" is a silly reason for not investing.

As far as risk goes, it's completely understandable why people think that way. After all, people saw the losses that were experienced in 2007 and 2008, either firsthand or through a friend or family member. And, stocks are risky in the sense that their values can fluctuate significantly from year to year. For example, not too long ago, I bought shares of Berkshire Hathaway for about $140, and it's entirely possible that they could drop to $100 next year. If I had $10,000 to pay for college tuition in a few months, I wouldn't put it in stocks.

However, the point of investing in stocks isn't to make money this week, this month, or even this year. Stocks are most effectively over long time periods because they have an inherent upward bias -- meaning that stocks tend to increase in value over the long run. Sure, the S&P 500 lost 38% during 2008, but it's gained more than 124% since then. In fact, the index has produced an annualized average total return of more than 9% throughout the past century -- and that includes the great depression, "Black Monday" in 1987, the tech crash, and the financial crisis. 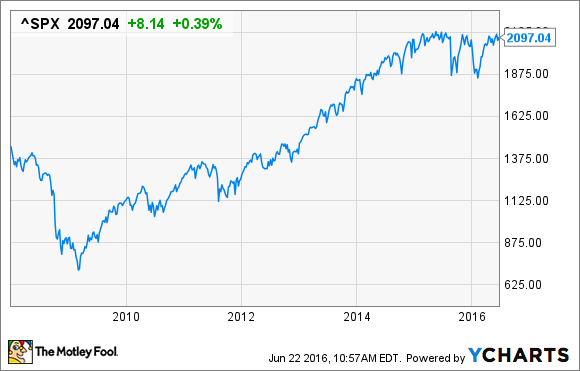 The point is that as long as you're thinking long-term, the volatility in the stock market shouldn't be a deterrent.

Naturally, at The Motley Fool we are generally in favor of individual stock ownership. However, if you don't want the risk or homework involved with choosing stocks, there is absolutely nothing wrong with putting your money into high-quality mutual funds and ETFs instead.

The point is that the long-term compounding power of the stock market is unmatched by any other asset class, and is the most reliable path to financial freedom. Most of the excuses people give for not investing are just that -- excuses. Stop making excuses and put your cash to work for your future.