What: Shares of Merrimack Pharmaceuticals (NASDAQ:MACK) have fallen by close to 28% this year, according to data from S&P Global Market Intelligence. Even apart from the recent sell-off stemming from the Brexit news, Merrimack's shares have struggled to shrug off the broader downturn among biotech and biopharma stocks that's hit cash flow negative companies like Merrimack particularly hard. 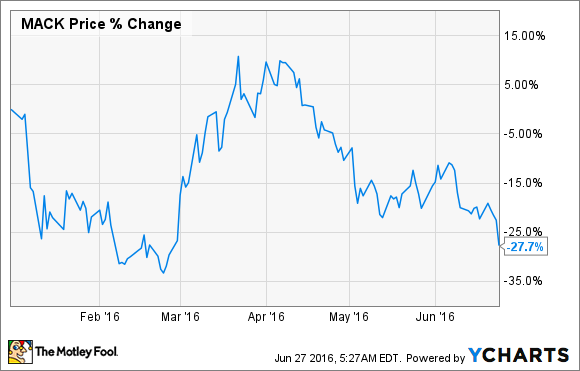 So what: Merrimack's shares have crumbled despite the commercial launch of its advanced pancreatic cancer drug Onivyde that some industry experts project could be a blockbuster. Part of the problem has been the drug slightly missing consensus sales estimates in the first quarter, but that's probably not enough to explain the stock's dramatic slide.

Now what: The good news is that the Street has remained overtly bullish on Onivyde's nascent commercial launch. Specifically, analysts are forecasting Merrimack's revenues to climb by over 84% this year, and by another 40% next year. Put simply, Merrimack's stock is arguably grossly undervalued right now if these top-line estimates hold true going forward.

Then again, this biotech still won't break out of the red any time soon due to its costly clinical activities, and there's no telling when the market's mood will change. Until then, cash flow negative operations such as Merrimack are likely to continue to push lower, and investors might be best served keeping a close watch on this biotech from the safety of the sidelines for the time being.