On June 13, Iconix Brand Group (NASDAQ:ICON) announced the repurchase of a large chunk of its debt. Since the announcement, shares have dropped over 9%. What are the long-term implications of the decision for the company, and how should investors be reacting? 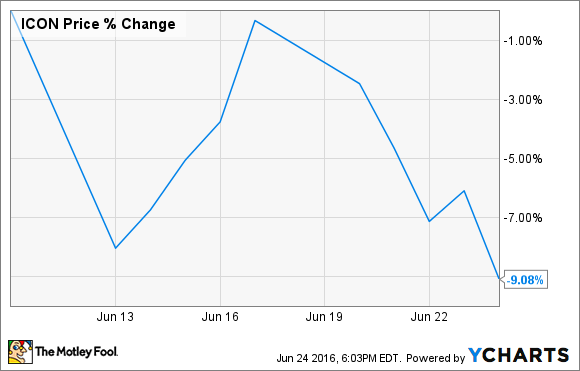 The details of the announcement

Iconix announced it has negotiated the purchase of up to $105 million of its $400 million 1.5% convertible notes due in March 2018. In exchange, former debtholders will be paid up to $35.2 million and approximately 6.8 million shares of stock of the company.

This comes a few months after the company's March 7 announcement that it had secured a five-year, $300 million loan to refinance its 2.5% convertible notes that were previously due this month. The March 7 deal and the newly announced repurchase plan are part of the company's announced ongoing efforts to lower its debt obligations.

Iconix had a rough stretch the past year or two. The company purportedly misstated earnings results a few years back. As a result, the company had to hire a new upper management team and respond to an inquiry to the Securities and Exchange Commission regarding accounting practices, all while dealing with falling revenues from the company's managed clothing and fashion brands.

Things are starting to look up. The new management team is in place, the SEC inquiry is done, and revenues appear to have bottomed out in recent quarters. How will the latest announcement of debt payoff affect business going forward?

What happens when the debt goes away?

Why would management choose to retire such a large portion of outstanding debt? And how does doing so alter the company's outlook?

As of the end of 2015, Iconix had liabilities totaling $1.75 billion. Over the course of the year, the company shelled out $82 million in interest payments. That figure is more than 20% of what the company expects to make in revenue during 2016. Debt and all the expenses related to having it has clearly been a problem for the company and dragging on bottom-line profits.

I think that offloading the debt was a good move for the company, especially when considering it will cost only $35 million in cash to pay down $105 million in debt. The part of the deal that involves the new stock is what has led to recent declines for investors.

Holders of the debt will receive 6.8 million new shares of stock. That increases the total number of shares, which reduces the amount of profit for each existing shareholder. With the announcement of the debt payoff, Iconix also announced a reduction in profit for the year as a result of the new shares. Earnings per share for the year were revised down by $0.04 to a range of $0.71 to $0.86, leading to the corresponding drop in stock price.

Is this a good deal for shareholders? Combining the value of the cash and the new stock, CFO Dave Jones stated that the company was "able to retire a future debt obligation for significantly less than its face amount." Basically, the company paid less to pay off the debt now than if it had waited until when it was due in 2018.

Having less debt on the books is a positive for investors over the long term as well. Interest payments will be less going forward, which means more cash is available to go to the bottom line. With more than a fifth of total revenue going toward interest payments, it makes sense for the company to seize an opportunity to reduce that amount.

Investing in Iconix has been a nail-biting experience in recent years. While a corner has been turned and things are starting to look up, that doesn't mean the company is completely out of the woods. There is still quite a bit of debt on the books that needs to be unloaded, and the new management team is still developing an action plan to return the business to growth.

That said, this recent announcement to unload debt is a positive. It is in line with initially stated objectives of the new team in charge, and it frees up future cash from having debtholders gobble it up. Owning Iconix is sure to continue being a wild ride, but this move is in the right direction. Investors should continue to hold on to shares of the beleaguered but recovering company.