Please ensure Javascript is enabled for purposes of website accessibility
Log In Help Join The Motley Fool
Free Article Join Over 1 Million Premium Members And Get More In-Depth Stock Guidance and Research
By Maxx Chatsko - Jun 28, 2016 at 8:35AM

Twelve nuclear reactors have been shuttered or given a future expiration date since 2013. That's horrible news for our ability to act on climate change.

The past several years have given us cause for optimism regarding our ability to respond to climate change. We've closed the Paris Climate deal (even if it's more symbolic than actionable), many have observed hints that global economic growth may be decoupling from carbon-dioxide emissions, we've continued to drive down the cost of wind and solar, and made record investments in renewable energy. Yet even as the need for carbon-free power grows, the United States continues to turn its back on the largest source of it: nuclear energy.

While those supporting the closure of nuclear power plants say the lost carbon-free power can be replaced by renewables, it's much more difficult to do in the real world. Moreover, the numbers suggest we need to prioritize all forms of carbon-free power -- not just wind and solar -- to meet our climate goals.

It's not easy being green? Try being nuclear

Last year the United States relied on 99 nuclear reactors for 19.5% of its electricity, which also represented about 63% of the nation's carbon-free power generation. Despite this obvious merit, the industry's future is uncertain. As Brad Plummer, senior editor at Vox, wrote, "Since 2013, five reactors have been retired early and at least seven more are scheduled to close -- all victims of cheap natural gas, unfavorable economics, and local opposition." That simple statement highlights multiple factors are at work here.

While Illinois generates 48% of its electricity from clean nuclear reactors, it hasn't valued the emissions-free power quite the same way it values wind and solar. Artificially cheap wind and natural gas have forced Exelon's nuclear power plants in the state to swallow losses in recent years, which forced the company to schedule its Clinton and Quad Cities nuclear power plants to close by June 2018. The decision came after Exelon failed to have the state recognize nuclear's importance in responding to climate change with monetary compensation equivalent to an additional $0.25 per monthly electric bill. Now realizing what that means, politicians and environmental groups are scrambling to work out a new subsidy for nuclear power, but at the moment the facilities are preparing to close.

Economic pressure has also forced PG&E Corporation to announce the scheduled closure of Diablo Canyon in California, although opposition to the state's last nuclear power plant certainly didn't help. Looking to avoid emissions increases that have accompanied recent nuclear reactor shutdowns in other states, the company has drafted a plan to replace the lost carbon-free generation with renewable energy, energy storage, and increased efficiency.

Whether or not that's realistically possible in the timeline provided, we're tripping over ourselves in the race against climate change. Even in a best-case scenario, shutting nuclear power plants forces us to replace one source of carbon-free generation with another. If the primary goal is to reduce emissions, then this strategy makes little sense, especially considering that renewable energy will have a difficult enough time replacing fossil fuels.

Transitioning to a carbon-free energy future by 2100 -- in time to limit global temperature increases to the internationally agreed upon 2 degrees Celsius -- will require us to overhaul our energy grids, transportation systems, and manufacturing processes. It's a daunting task to complete in just 80 years. Here, energy includes electricity and liquid fuels.

Roger Pielke Jr., professor of environmental studies at the Center for Science and Technology Policy Research at the University of Colorado, estimates that to stabilize global carbon dioxide emissions with the Earth's natural carbon sinks, "the proportion of global energy that comes from carbon-free sources needs to exceed 90%" by the second half of this century.

Pielke used historical global energy data from BP to illustrate where we are today and where he estimates we need to be in 2100: 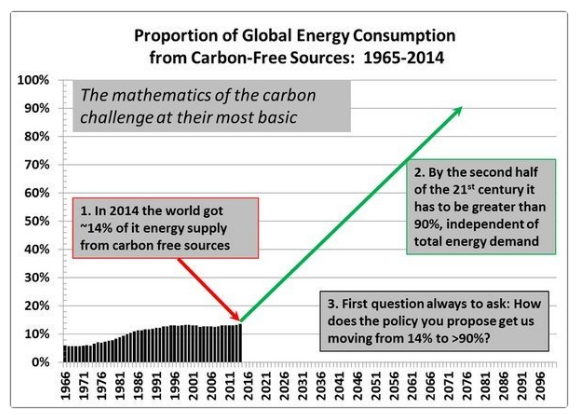 Significant investments are needed to grow carbon-free energy sources from 14% of consumption today to 90% or more by the back half of the 21st century. Not only do we have to supplant existing energy sources, but we'll also have to outpace increases in energy consumption driven by industrializing economies and quickly growing fleets of power-hungry electric vehicles.

Plummer summarized the preceding chart and the task in front of us, writing: "That means (roughly) deploying 1 gigawatt of carbon-free power every single day for the next century -- the equivalent of opening a large nuclear power plant around the world every day, or raising 1,500 wind turbines every day."

Rather than shuttering nuclear reactors, we should, at the very least, invest in keeping existing nuclear facilities in operation. And while continuing to build traditional nuclear reactors may not make much economic sense, next-generation reactors that are smaller, cheaper, and meltdown-proof (and can consume nuclear wastes) may play an important role in helping us achieve 90% carbon-free energy.

Investors understand that economics always wins - eventually. It may appear that the markets have spoken and nuclear is non-competitive. But it's not quite fair to subsidize wind and solar while leaving nuclear power out to dry, especially if we have decided that there's tremendous value in energy sources that reduce or eliminate emissions. If you think we can do without nuclear energy, perhaps the preceding chart will have nudged you to reconsider.