Energy storage and EVs need battery prices to fall rapidly and that may be exactly what's happening today.

We're getting some interesting news lately about the pace of cost reductions in the lithium ion battery industry and it could bode well for new industries forming today. According to energy storage company Stem's Chief Technology Officer, battery prices have fallen a whopping 70% in the last 18 months.

Battery prices are key to unlocking energy storage in homes, at large buildings, and at utilities that could shave peak energy costs and allow more renewable energy to hit the grid. And for electric vehicles, falling battery costs could make it attractive for millions more people to buy an EV.

The falling cost of batteries

A good baseline for energy storage battery costs is Tesla Motors' (TSLA 0.91%) Powerwall. When the product was launched in May 2015 it cost $3,000 for a 6.4 kWh model (the 10 kWh model was soon discontinued), which was crazy low at the time. That's a cost of $469 per kWh and doesn't include key components like an inverter. But that may be a price that's already been surpassed in the market.

General Motors (GM -0.89%) let slip late last year that battery cells (not the full pack) from LG Chem cost an "industry leading" $145 per kWh. GTM Research recently reported that battery costs are in the "$200 to $250 per kilowatt-hour range" today.

Maybe the 70% price reduction is realistic and maybe GM's cell costs weren't out of line with industry norms. If this trajectory keeps up, even at a slightly slower pace, the energy storage and EV business could explode in the next decade. And there's some precedent in where we may see costs go.

Capacity expansion will be key

I find a lot of similarities between the growth of solar panel production 5 to10 years ago and batteries today. By 2011, the solar industry and panel sale prices collapsed because there was such high growth expectations from manufacturers and so much overcapacity that manufacturers were just trying to cover their own cash costs and keep the lights on. This created a downward spiral in both manufacturing costs and sale prices for panels. Cost reductions were an urgent priority, which often required new equipment, which mean more capacity was built, and on and on. Reducing costs and panel prices became the norm, shown by Canadian Solar saying the costs to build a solar panel have fallen from an already low $1.32 per watt five years ago to $0.41 today.

We may be in the early phases of a similar dynamic in energy storage. Tesla Motors' 35 GWh Gigafactory was built on the premise that energy storage and EV demand would explode. But others saw the same trend coming as well.

Recent data from the Clean Energy Manufacturing Analysis Center report, based on data from BNEF Desktop Portal 2016, shows that 43.7 GWh of battery capacity is fully commissioned with another 11.8 GWh partially commissioned and 42.5 GWh under construction (mostly from Tesla). In all, 98.0 GWh of capacity will be available in the next few years. 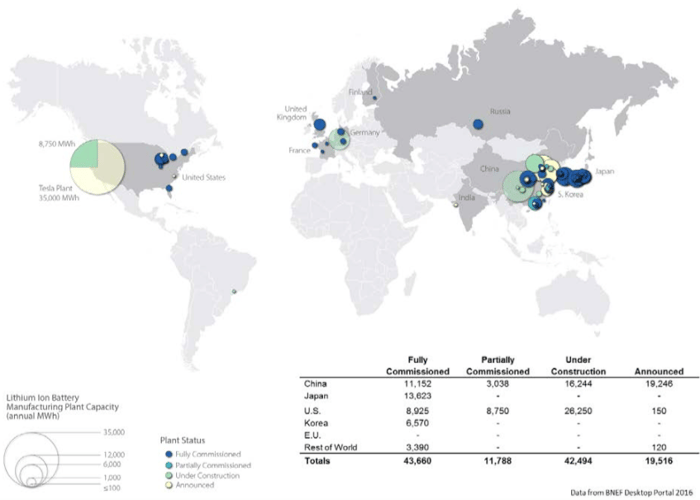 What's crazy is that may leave the industry oversupplied for many years to come. The same report estimates that electric vehicle demand for lithium ion batteries won't hit today's capacity level until 2020. And by then the market may have twice as much supply as it needs. 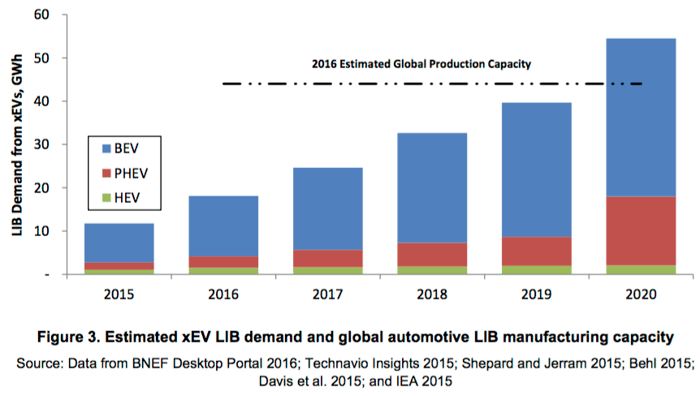 To put these capacity numbers into perspective, 98.0 GWh of batteries would be enough to build 1.63 million Tesla Model 3s with a 60 kWh battery annually (reportedly the biggest size in a base model Model 3). Some of the additional supply could go to energy storage, but that's a tiny market with 221 MW installed in the U.S. last year.

What this means for the future of batteries

There's a lot of hype around how quickly energy storage and electric vehicles could grow. But it looks like the battery capacity that would serve these markets is already growing faster than the end markets themselves. Unless there are millions of EVs built annually by 2020, I think there's going to be massive oversupply in the market.

That's great for companies buying batteries, like General Motors, Stem, SunPower, VW, etc. But if the solar industry is any indication, the companies making batteries will be stuck in a price war with competitors who are just trying to keep factories running. That'll lead to even more downward pressure on prices, which again is good for end product manufacturers.

The battery market will be fascinating to watch over the next five years, but if the adjacent solar industry is any indication, I would want to invest in companies buying batteries and putting them to work, not companies building out capacity that may see prices fall every year for the next decade.