As the solar industry grows, 8point3 Energy Partners may be the safest way to get exposure to the industry and get a great dividend. When 8point3 Energy Partners (CAFD) was launched last year, it was billed by sponsors First Solar (FSLR -1.35%) and SunPower (SPWR 0.14%) as the most conservative and transparent yieldco on the market. That level of conservatism has proven to be valuable in a declining yieldco market, which you can see below. And after another quarter of beating expectations, this is a stock dividend investors shouldn't ignore. 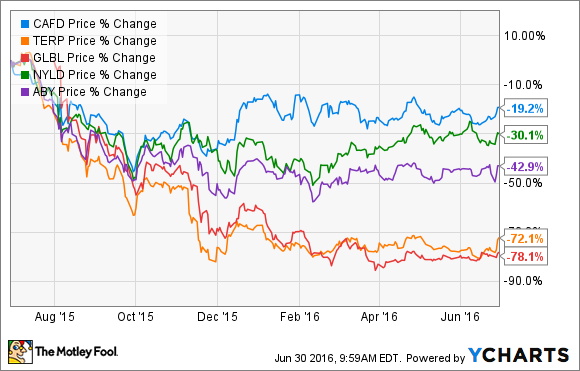 Fiscal second-quarter results are best put up against 8point3 Energy's guidance after the first quarter; here's how its projections stack up against its performance.

If it seems strange EBITDA is higher than revenue, it's because projects that are 49% owned by the partnership aren't pulled into the revenue line of the income statement, but they do contribute to EBITDA, CAFD, and net income.

Management also noted that it's aiming to keep borrowing low enough to earn a AAA credit rating. The current revolver facility is LIBOR +200 basis points, which today is about a 2.47% interest rate. This compares to debt TerraForm Power has with 5.875% and higher interest rates. Low borrowing costs mean more cash flow goes to shareholders when projects are bought, so this is great news for shareholders.

The big move this quarter was the transfer of ROFO (Right of First Offer) projects from 2016 to out years. The moves are shown in the chart below, but they need some explanation.

The yieldco's goal is to grow its dividend consistently at 12%-15% annually. To do so, it must continually buy projects that will be accretive to the dividend, and to fund projects, it will issue debt and/or equity (hence the need for low interest rates).

The way the initial ROFO portfolio was constructed, First Solar and SunPower expected a lot of projects to be completed in 2016, as the solar investment tax credit expired, and then far fewer projects or less visibility in out years. Since the IPO, the ITC has been extended, and projects have been signed in those out years.

These transfers give the yieldco the first crack at buying ROFO projects -- essentially building a pipeline to fuel that dividend growth. If it had been forced to bid on nearly 1 GW of projects in 2016, the company would have had to sell shares at a fairly high dividend rate, which may not have been as attractive an option as stock sales in 2017 or 2018, when the dividend yield may be lower. In short, this move adds flexibility and gives visibility for future dividend growth.

What this doesn't do is preclude the yieldco from buying projects in 2016 or 2017 from either sponsor if the conditions are right. If the stock goes up to $25 per share and the dividend yield falls to less than 4% we could see it buy the full 1 GW of projects that were previously in the ROFO portfolio. It would just have to compete with an open market rather than being the first bidder.

The good news for First Solar and SunPower

The partnership has also ended its dividend forbearance period with First Solar and SunPower. This means the two developers will get dividends on their 51 million shares in the company.

First Solar holds 22.12 million shares, and SunPower holds 28.88 million shares. That means next quarter's projected dividend payments would be $5.32 million and $6.95 million, respectively. If you stretch that out to an annualized basis, they'll be getting $21.3 million and $27.8 million, respectively, which isn't bad cash flow for each company to bet getting on projects they've already sold.

A yieldco worth holding on to

8point3 Energy Partners isn't going blow anybody away with its growth rate or become an aggressive buyer of third-party solar projects (something it says it won't do), but it will be a consistent dividend growth stock through at least 2017. And if the stock rises, the company could buy more projects for future growth.

At a time when renewable energy companies are taking big risks on buying projects with debt and building out capacity or infrastructure, investors should be looking for safer companies with more measured growth plans. That's what 8point3 Energy Partners has built, and its an undervalued dividend stock in an industry with decades of future growth ahead.

Travis Hoium owns shares of 8point3 Energy Partners, First Solar, and SunPower. The Motley Fool has no position in any of the stocks mentioned. We Fools may not all hold the same opinions, but we all believe that considering a diverse range of insights makes us better investors. The Motley Fool has a disclosure policy.