Please ensure Javascript is enabled for purposes of website accessibility
Free Article Join Over 1 Million Premium Members And Get More In-Depth Stock Guidance and Research
By Brian Feroldi - Jul 5, 2016 at 8:21AM

It's been a rough year for the clinical-stage biotech. Here's a look back at the key events that have contributed to the stock's decline.

What: Investors in the clinical-stage bio Ophthotech ( ISEE -0.58% ) have had to deal with a brutal start to the year. Shares are currently down more than 31% since the calendar turned to 2016, according to data from S&P Global Market Intelligence. 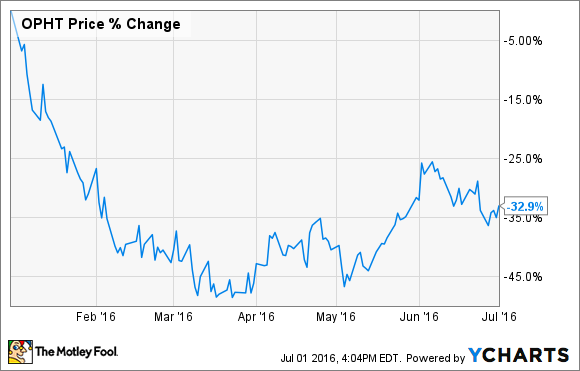 So what: So why has the market soured on the company's shares? Here's a review of a few key developments that have caused Ophthotech's stock to move this year.

Since the news has almost universally been positive out of the company, I have a hard time believing that shares have plunged because of a few insider sales. What's far more likely is that the company's stock has simply been a victim of the general biotech sell-off.

Take a look at the year-to-date performance of the SPDR S&P Biotech ETF ( XBI 0.19% ) compared with Ophthotech's stock to see what I mean. 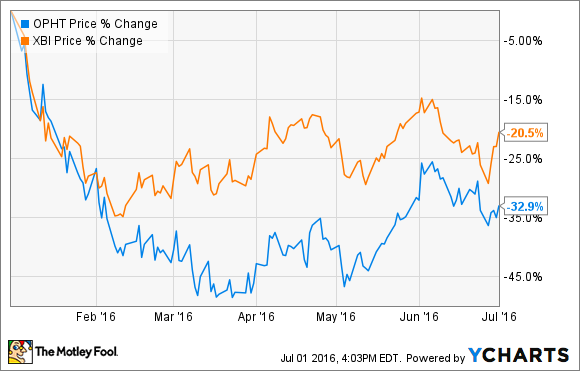 Now what: Shares of Ophthotech may be in the doghouse in 2016, but a little perspective is warranted. Keep in mind that Ophthotech soared 75% higher in 2015, so perhaps it's unsurprising to see traders in profit-taking mode, given that there's so much fear surrounding any clinical-stage biotech right now.

Despite the poor performance, I continue to see plenty of reasons to be optimistic about Ophthotech's future. Remember that clinical trials showed that using the company's experimental drug Fovista alongside Novartis' Lucentis showed a 10.6-letter improvement in vision on a standard eye chart. That result compares favorably with the 6.5-letter improvement among patients who used Lucentis alone. It's possible that clinical results could show a similar improvement when we see data from the Eylea/Avastin trials, too. If so, then Fovista holds real promise to become a standard-of-care treatment in a fast-growing, multibillion-dollar market.

Add that to the potential Zimura holds, and it's not hard to believe that Ophthotech could start to turn a profit in just a few years' time. In fact, at least one analyst is predicting that the company will be earning more than $7 per share by 2020. If that prediction proves even close to matching reality, then shares look to be very attractively priced today. Investors with a stronger-than-average stomach for risk might want to consider adding a few shares of this promising stock to their portfolio.

These Were the 10 Best Stocks of 2019
Bad News Bashes Biotech Investors... Again
Fovista Flops: What's Next?