It's now been over one year since Twitter (NYSE:TWTR) co-founder Jack Dorsey returned to the helm of the company he founded.

In the 12 months since, things haven't unfolded as Twitter bulls had envisioned. Twitter shares today trade at less than half the value they did when Dorsey replaced Dick Costolo as interim CEO. 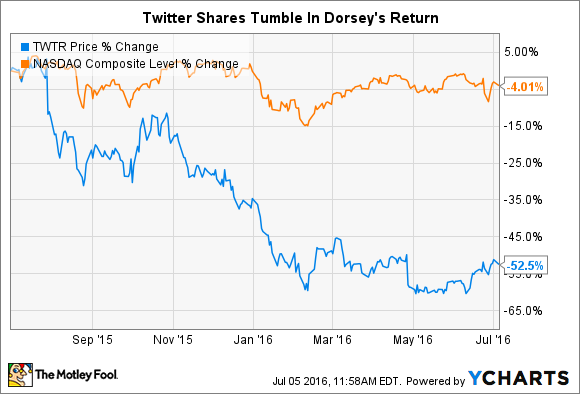 Dorsey's expertise in product development was hailed as the primary reason for his return. However, with the company's latest incremental improvement, one thing has become painfully clear: This isn't the product revamp Twitter investors wanted.

In a company blog post last week, Twitter announced that the service will now allow users to add stickers to images they upload to the service.

Coming soon! Unleash your creativity by adding fun #Stickers to your photos on Twitter: https://t.co/Ph92Oivyhy pic.twitter.com/NZoM6nHenD

The news comes as other social-media properties such as Facebook are also reportedly developing products or features popularized by insurgent social-media rising star Snapchat.

As part of the changes, Twitter will also allow users to search for images based on the stickers applied to the image, a move that could prove particularly powerful among advertisers interested in conducting paid campaigns featuring so-called "sponsored stickers," as we've seen at Snapchat.

The move could help Twitter encourage photo sharing on the platform, a long-standing weakness relative to more visually oriented services such as Facebook, Instagram, and Snapchat. While Twitter's user growth has largely stagnated in recent quarters, image-intensive rivals Snapchat and Instagram have both seen their respective audiences continue to swell.

For context, Facebook-owned Instagram counts over 300 million daily active users (DAUs) on its service. Snapchat reportedly receives over 150 million DAUs. Though four and six years older than Instagram and Snapchat,   respectively, the decade-old Twitter sees only 140 million users accessing   its service on a daily basis. So while Twitter's sticker strategy may indeed help address one lacking aspect it's the platform, it more also speaks to the increasing incrementalism of Twitter's product revival.

Twitter's decision to implement a largely copycat feature from Snapchat does seem more likely than not to attract more users and encourage user interaction on the service. Promoting photo sharing should help increase user engagement and also broaden Twitter's appeal beyond its longtime sweet spot as a real-time news and analysis platform.

In this sense, Twitter's move, though blatantly copying Snapchat, should help the company address its core user growth problem. However, Twitter's move also serves as the most recent example of the deficiencies in the company's new growth strategy.

In the past year, Twitter has hired a highly credentialed CMO, changed the way its algorithm places tweets in users' timelines, tweaked its 140-character limit, and more. Each move has been aimed at increasing Twitter's appeal to users. However, in total, these efforts fail to significantly alter the product in a way that more than marginally expands Twitter's appeal. Twitter today isn't particularly different from what it was 12 months ago. The company needs a game-changer, and such a product innovation has been elusive during Dorsey's second go-round at the helm.

Other than the company's flirtation with adding a long-form publishing product, it appears Twitter hasn't seriously considered any ideas that could meaningfully expand the service's appeal to an entirely new cohort of users, which naturally spills over to investors' estimates of Twitter's potential long-term audience. Even as the company has made compelling progress in increasing its revenue-per-users, the company's ability to continue to grow revenue into the long term faces an upper limit in the absence of new users.

It doesn't seem Twitter has any compelling solution to this core problem. So it seems more likely that we'll see continued small-scale improvements to the service, while growing rivals such as Instagram and Snapchat continue to swell in size, much to Twitter's detriment.