Warren Buffett's right-hand man, Charlie Munger, once said that Wells Fargo was the standard by which be measured the adequacy of any other investment. Buffett himself has said Wells Fargo is the stock he would put the entirety of his net worth into if he could, a view he shared at the depths of the 2008 financial crisis.

There are, of course, limits to Berkshire's ownership stake of the California-based bank. But thanks to some light buying by Berkshire, and continuous share repurchases by Wells Fargo, Berkshire's stake surpassed 10% in March.

Berkshire will need approval from the Federal Reserve to purposefully increase its stake further, approval that the conglomerate hasn't had to seek for American Express, a bank holding company in which Berkshire holds roughly 16% ownership. Berkshire escaped having to apply for approval by promising the government that it wouldn't interfere with Amex's internal governance. In fact, Berkshire agreed to follow the recommendations made by the credit card issuer on any company votes.

That Berkshire wants to increase its stake in Wells Fargo isn't all that surprising. Buffett and Munger hold it in high esteem, as both Berkshire and Daily Journal, where Munger sits as chairman, have increased their holdings of the company almost religiously -- even during the darkest days of the financial crisis.

Buffett and Munger clearly see the bank as a safe place to put capital to work to achieve an attractive return. In the 10-year period since 2006, a period that includes the financial crisis, Wells Fargo has earned a double-digit return on its equity in all but two years, 2008 and 2009. It was profitable in every single year during the past 10 years.

Its historical record is most impressive when one considers that the past 10 years also include several post-crisis years of exceptionally low interest rates that make investors dream of the pre-crisis returns on equity that exceeded 20% for years on end. Wells Fargo's low-cost deposits enable it to earn sufficient margins on its simple model of gathering deposits and making loans, with or without cooperation from the Federal Reserve to push rates higher. 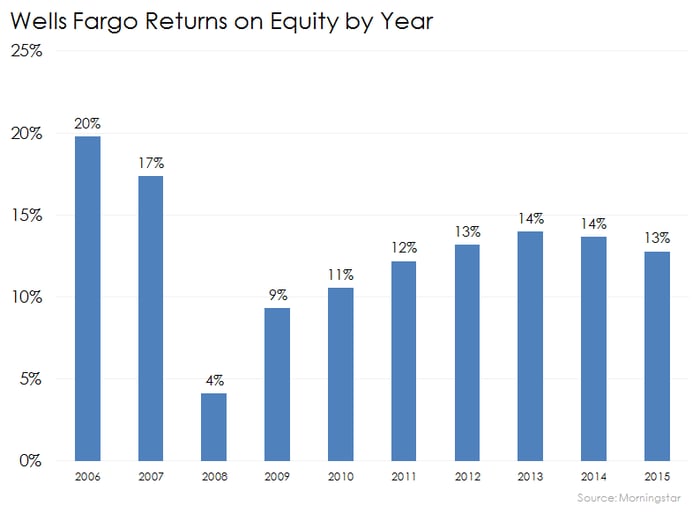 Even better, the company is a fee machine. Last year, the bank generated about $40.8 billion in noninterest income, compared with noninterest expenses of about $50 billion. Put another way, nearly 82% of its noninterest operating expenses were covered by less-cyclical fee income. Wells Fargo doesn't need take outsize risk in lending to generate industry-beating returns.

With Berkshire Hathaway's pre-tax profits rising to nearly $35 billion in 2015, Buffett and Munger have to search harder to find adequate returns for their investors. Buying Wells Fargo at about 11 times earnings (equivalent to a 9% earnings yield) is sufficient for a holding company that increasingly produces more cash than its world-class investors know what to do with.